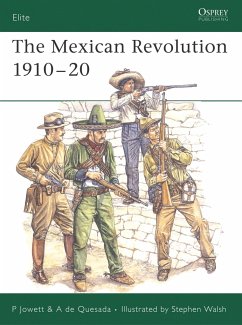 Some of the most famous Western movies have been set against the background of the Mexican Revolution of the early 20th century. Now, for the first time in English, Osprey offer a concise but fact-packed account of the events, armies, uniforms and weapons of those ten chaotic and bloody years, putting in context such famous but half-understood names as Diaz, Pancho Villa, Zapata, Madero and Huerta. The text is illustrated with many rare and fascinating period photographs, and with eight detailed color plates of orfiristas and Rurales, Maderisitas, Federales, Villistas, Zapatistas,and US volunteers and intervention troops.…mehr