Space Safety is No Accident 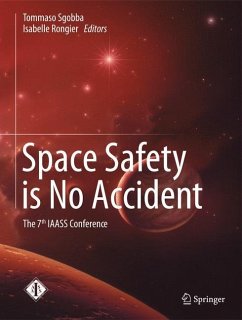 Space Safety is No Accident

The 7th IAASS Conference, "Space Safety is No Accident" is an invitation to reflect and exchange information on a number of topics in space safety and sustainability of national and international interest. The conference is also a forum to promote mutual understanding, trust and the widest possible international cooperation in such matters. The once exclusive "club" of nations with autonomous sub-orbital and orbital space access capabilities is becoming crowded with fresh and ambitious new entrants. New commercial spaceports are starting operations and others are being built.

In the manned spaceflight arena a commercial market is becoming a tangible reality with suborbital spaceflights and government use of commercial services for cargo and crew transportation to orbit. Besides the national ambitions in space, the international cooperation both civil and commercial is also gaining momentum. In the meantime robotic space exploration will accelerate and with it the need to internationally better regulate the usage of nuclear power sources. Space-bound systems and aviation traffic will share more and more a crowded airspace, while aviation will increasingly rely on space-based safety-critical services. Finally, most nations own nowadays space assets, mainly satellites of various kinds and purposes, which are under the constant threat of collision with other spacecraft and with the ever increasing number of space debris. Awareness is increasing internationally (as solemnly declared since decades in space treaties) that space is a mankind asset and that we all have the duty of caring for it. Without proactive and courageous international initiatives to organize space, we risk to negate access and use of space to future generations.

Produktdetails
Autorenporträt
Tommaso Sgobba holds an M.S. in aeronautical engineering from the Polytechnic Institute of Turin, where he was professor of space system safety from 1999-2011. Currently, he is President Emeritus and co-founder of the International Association for the Advancement of Space Safety (IAASS), which gathers the top space safety experts worldwide. He is also Board Member of the US-based International Space Safety Foundation (ISSF). Until October 2012, Sgobba was responsible for flight safety at the European Space Agency (ESA), including human-rated systems, spacecraft re-entries, space debris, use of nuclear power sources and planetary protection. He joined ESA in 1989, after 13 years in the aeronautical industry. Initially he supported the developments of the Ariane 5 launcher, several earth observation and meteorological satellites and the early phase of the Hermes spaceplane. Later he became product assurance and safety manager for all European manned missions on Shuttle, MIR station and for the European research facilities for the International Space Station (ISS). During his long and close cooperation with the NASA Shuttle/ISS Payload Safety Review Panel, Sgobba developed at ESA the safety technical and organizational capabilities that eventually led in 2002 to the establishment of the first ESA formal safety review panel and first International Partner ISS Payload Safety Review Panel. He was also instrumental in setting up the ESA Re-entry Safety Review Panel and in organizing the first ESA scientific observation campaign of a destructively re-entering spacecraft (ATV- Jules Verne). Sgobba received the NASA recognition for outstanding contribution to the International Space Station in 2004 and the prestigious NASA Space Flight Awareness (SFA) Award. Sgobba has published several articles and papers on space safety, and has co-edited with two NASA colleagues the text book "Safety Design for Space Systems," published in 2009 by Elsevier, and "The Need for an Integrated Regulatory Regime for Aviation and Space," published in 2011 by Springer. He is also chief-editor of the book "Safety Design for Space Operations;" the Managing Editor of the Journal of Space Safety Engineering; and member of the editorial board of Space Safety Magazine. Isabelle Rongier is General Inspector, Director of General Inspection and Quality, of the French Centre National d'Etudes Spatiales (CNES) since April 2010, in charge of internal audit and risk assessment at Agency level and responsible for certifying technical conformity to the French Space Operation Act before each space operation (launch operations and in orbit operations) is authorized. Before (2005-2010), Isabelle Rongier was the Technical Director of CNES Launcher Directorate, dealing with all technical domain She has worked on all launchers operated from the European spaceport in French Guyana: Ariane 4 and 5, VEGA and Soyuz. She has always been deeply involved in safety methods and studies for all those launchers. From 1997 to 2005, Isabelle Rongier served as head of system department and senior expert on flight management, including trajectory optimization, GNC algorithms design and validation, on board flight software design and qualification, transient phases analysis. All these skills are necessary assets for performing safety analyses.
Inhaltsangabe
Acknowledgments.- Preface.- Conference Purpose and Goals.- Part I: Space Debris.- Part Ia: Space Debris Removal and De-orbitation.- Part II: Space Safety Culture, Policy and Legal Challenges.- Part III: Safety by Design.- Part IV: Launch Safety.- Part V: Commercial Human Spaceflight Safety.- Part Va: Human Factor & Safety.- Part Vb: Human Spaceflight Safety.- Part VI: Space Traffic Management.- Part VII: Re-entry Safety.- Part VIII: Orbital Station and Extraterrestrial Habitat Safety. Part IX: Hazard Analysis and Risks Assessment.- Part X: Space Risks for Aviation.- Appendix A: List of Participants.- Appendix B: Photos.
Kundenbewertungen
Schreiben Sie eine Kundenbewertung zu diesem Produkt und gewinnen Sie mit etwas Glück einen 15,- EUR bücher.de–Gutschein!
Bewertung schreiben Bewertung schreiben