German Idealism and the Problem of Knowledge: 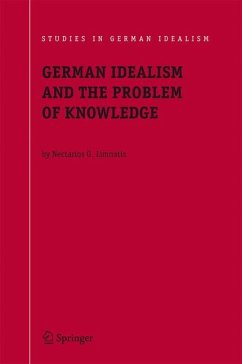 German Idealism and the Problem of Knowledge:

The problem of knowledge in German Idealism has drawn increasing attention. This is the first attempt at a systematic critique that covers all four major figures, Kant, Fichte, Schelling, and Hegel. The book offers a fresh and challenging analysis.
The movement of German idealism culminates in the revelation of the re? ective boundaries of theoretical knowledge. The history of the most important intellectual developments thereafter could be described, following a recent remark of Jürgen Habermas, as a his- 1 tory of the de-transcendentalization of the cognizing subject. In this context, the…mehr

Andere Kunden interessierten sich auch für
Produktbeschreibung
The problem of knowledge in German Idealism has drawn increasing attention. This is the first attempt at a systematic critique that covers all four major figures, Kant, Fichte, Schelling, and Hegel. The book offers a fresh and challenging analysis.The movement of German idealism culminates in the revelation of the re? ective boundaries of theoretical knowledge. The history of the most important intellectual developments thereafter could be described, following a recent remark of Jürgen Habermas, as a his- 1 tory of the de-transcendentalization of the cognizing subject. In this context, the epistemological interpretation proposed in this book must be speci? cally understood. Examining the problem of knowledge in the development of German idealism, it aims not at an epistem- ogy of the Cartesian type, and even less at a formal logical analysis of knowledge which lacks the re? ective element of the devices it employs as the search for the immutable structures within which knowledge, 2 life, and culture must be contained. These structures do not only condition the process of knowledge, they are themselves conditioned. There is thus an unsurpassable circle in this process, a circle which German idealism brings to the surface and profoundly scrutinizes. Therefore, the task is to re? ectively account for the historical horizons in which cognition arises (being ultimately thereupon dependent), instead of searching for an ultimate Archimedean point for its deduction. Rather than searching for inexplicably transc- dental concepts, this argument points to their determination from within a given Lebenswelt. It does not renounce but rather rede? nes 3 objectivity, by seeing the subject as a coming-to-know-itself totality. 1 J. Habermas, Wahrheit und Rechtfertigung. Philosophische Aufsätze (Frankfurt a. M. : Suhrkamp, 1999), p. 186.
Produktdetails
Autorenporträt
Nectarios G. Limnatis received a Ph.D. (2004) from the Department of Philosophy, Graduate Faculty of Political and Social Science, New School for Social Research, and another Ph.D. (1996) from the Faculty of Philosophy, Moscow State University. His research interests span the History of Philosophy (particularly, German Idealism from Kant to Hegel and Marx), 20th Century Continental Philosophy, Social and Political Philosophy, and Ethics. He has taught at various universities in Europe and the USA, and is currently teaching at Hofstra University in New York. Besides articles and book reviews in several languages, he has written Manipulation: Essence, Appearances, Ways of Sublation (Moscow: Ekonomycheskaya Demokratya 2000, in Russian), and co-edited Prospettive sul Postmoderno, vol. 1: Considerazioni epistemologiche, vol. 2: Ricerche etico-politiche (Milano: Edizioni Mimesis, 2006, in Italian). At present, he is working on the edition of a book called The Contours of Hegel's Dialectic (forthcoming). Further projects include A Critical Theory of Globalization and Hegel and Analytic Philosophy.
Inhaltsangabe
INTRODUCTION.

3. From Metaphysics to Epistemology I: From the Phenomenology to the Logic or Hegel's Claim for Absolute Knowing and its Meaning
3.1. Idealism, Reason and Contradiction in the Early Hegel 3.2. Hegel' Phenomenology. The Coming to be of the Self and the Question of Intersubjectivity 3.3. The Transition to Self-Consciousness and Idealism

This is a very important, well thought out, extremely well documented, useful, very intelligent account and analysis of the epistemological problem in German idealism in general. The German idealist approach to the problem of knowledge has increasingly attracted attention in recent years. This is the first effort at an overall account with detailed discussion of all the main figures.

So far as I know, there is nothing comparable to this book available in any language. It is therefore a kind of instant classic, which will attract attention from those interested in this problem or in a widespread account of some main features of the entire range of figures in German idealism. Limnatis knows his materials very well. What he has to say is interesting and important.

There is probably nothing comparable to Limnatis's work in the literature since Kroner, perhaps earlier. Someone like Cassirer would have been proud of this kind of book. In discussing German idealism in great detail, Limnatis calls us back to the origin of the problems that are now central in the contemporary discussion.

....philosophically first-rate, original, much needed, and scrupulous in a genuinely daring way in its attempt to work through, philosophically, the central innovation of the tradition that runs from Kant to Hegel (and beyond), including, in a sustained and continuous way, an analysis of the contribution and limitations assigned to Kant, Fichte, Schelling, and Hegel chiefly. Efforts of this kind are extraordinarily rare and even more rare when informed by a commanding grasp of the accumulating scholarship and applied to all four figures. It seems more than reasonable to believe that the subsequent discussion of the issues Limnatis raises will have to come to terms with his range of scholarship and innovativeness.

...the overall impression....is one of unusual competence, breadth of reading, and dialectical skill (on the author's part), which justifies viewing his own contribution as a continuation of the classic discussion. That, I would say, is as grand a compliment as any contemporary author could hope for.