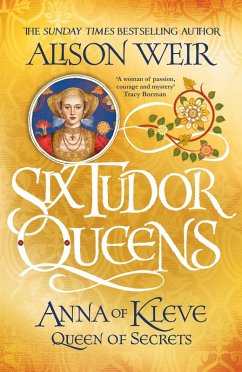 Alison Weir, historian and author of the Sunday Times bestsellers Katherine of Aragon: The True Queen , Anne Boleyn: A King's Obsession and Jane Seymour: The Haunted Queen , paints a spellbinding portrait of Anna of Kleve, Henry VIII's fourth queen.
'This six-book series looks likely to become a landmark in historical fiction' The Times
A GERMAN PRINCESS WITH A GUILTY SECRET.

The King is in love with a portrait, but the real Anna does not enchant…mehr

A GERMAN PRINCESS WITH A GUILTY SECRET.

The King is in love with a portrait, but the real Anna does not enchant him.

She must win him over. Everyone knows that Henry won't stand for a problem queen.

But rumours of Anna's past are rife at court - dangerous talk that could mark her downfall. Can this clever, spirited young woman reach out in friendship to the King, and gain his love forever?

ANNA OF KLEVE
THE FOURTH OF HENRY'S QUEENS
HER STORY

Acclaimed, bestselling historian Alison Weir draws on new evidence to conjure a startling image of Anna as you've never seen her before. A charming, spirited woman, she was loved by all who knew her - and even, ultimately, by the King who rejected her.

History tells us she was never crowned.
But her story does not end there.

Alison Weir is the top-selling female historian (and the fifth-bestselling historian overall) in the United Kingdom, and has sold over 3 million books worldwide. She has published eighteen history books, including her most recent non-fiction book, Queens of the Conquest, the first in her England's Medieval Queens quartet. Alison has also published several historical novels, including Innocent Traitor and The Lady Elizabeth.

Katheryn Howard, The Tainted Queen is Alison Weir's tenth published novel and the fifth in the Six Tudor Queens series about the wives of Henry VIII, which was launched in 2016 to great critical acclaim. All four books in the series are Sunday Times bestsellers.

Alison is a fellow of the Royal Society of Arts and an honorary life patron of Historic Royal Palaces.
Rezensionen
There is an Anne of Cleves we all think we know - the dumpy fourth wife so uninspiring that Henry VIII couldn't even consummate their marriage. Alison Weir gives us a radically different 'Anna of Kleve' - one who is definitely hiding some secrets under her thick, unbecoming German gown. It takes a writer of Weir's skill to make us believe her fantasia on the established story. But more importantly, it takes a historian of Weir's experience - her familiarity with the sources, and the period detail - to use this compelling fiction to cast a revealing fresh light on the real historical figure. Sarah Gristwood
Kundenbewertungen
Schreiben Sie eine Kundenbewertung zu diesem Produkt und gewinnen Sie mit etwas Glück einen 15,- EUR bücher.de–Gutschein!
Bewertung schreiben Bewertung schreiben
Mehr zum Thema