The Sun is also a Star 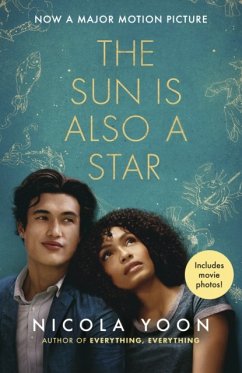 The Sun is also a Star

The fantastic new YA love story from master storyteller and author of Everything, Everything, Nicola Yoon

Andere Kunden interessierten sich auch für
Produktbeschreibung
The fantastic new YA love story from master storyteller and author of Everything, Everything, Nicola Yoon
Produktdetails
Autorenporträt
Nicola Yoon is the author of the #1 New York Times bestsellers The Sun Is Also a Star and Everything, Everything, both of which have been turned into major motion pictures. She grew up in Jamaica and Brooklyn and lives in Los Angeles with her husband, novelist David Yoon, and their daughter. She's also a hopeless romantic who firmly believes that you can fall in love in an instant and that it can last forever. Follow Nicola Yoon on Instagram and Tumblr and @NicolaYoon on Twitter.
Rezensionen
The #1 New York Times Bestseller
A National Book Award Finalist
A Michael L. Printz Honor Book
A New York Times Notable Book
A BuzzFeed Best YA Book of the Year
A POPSUGAR Best Book of the Year
A Publishers Weekly Best Book of the Year
A Kirkus Reviews Best Book of the Year
A Booklist Editor's Choice
A New York Public Library Best Book for Teens
Recipient of the John Steptoe New Talent Award
A Walter Award Honor Book

"An exhilarating, hopeful novel exploring identity, family, the love of science and the science of love, dark matter and interconnectedness--is about seeing and being seen and the possibility of love... and it shines." Shelf Awareness, starred review

Lyrical and sweeping, full of hope, heartbreak, fate. . . and the universal beating of the human heart." Booklist, starred review

"With appeal to cynics and romantics alike, this profound exploration of life and love tempers harsh realities with the beauty of hope in a way that is both deeply moving and satisfying." Kirkus, starred review

A love story that is smart without being cynical, heartwarming without being cloying, and schmaltzy in all the best ways. The Bulletin, starred review

"This wistful love story will be adored by fans of Rainbow Rowell s Eleanor & Park." SLJ

Will give you butterflies. Seventeen

A do-not-miss for fans of John Green and Rainbow Rowell (aka everyone). Justine