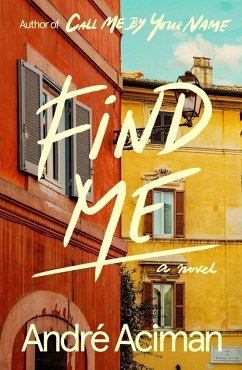 A New York Times Bestseller In this spellbinding exploration of the varieties of love, the author of the worldwide bestseller Call Me by Your Name revisits its complex and beguiling characters decades after their first meeting. No novel in recent memory has spoken more movingly to contemporary readers about the nature of love than André Aciman's haunting Call Me by Your Name. First published in 2007, it was hailed as "a love letter, an invocation . . . an exceptionally beautiful book" (Stacey D'Erasmo, The New York Times Book Review). Nearly three quarters of a million copies have been sold,…mehr

Andere Kunden interessierten sich auch für
Produktbeschreibung
A New York Times Bestseller In this spellbinding exploration of the varieties of love, the author of the worldwide bestseller Call Me by Your Name revisits its complex and beguiling characters decades after their first meeting. No novel in recent memory has spoken more movingly to contemporary readers about the nature of love than André Aciman's haunting Call Me by Your Name. First published in 2007, it was hailed as "a love letter, an invocation . . . an exceptionally beautiful book" (Stacey D'Erasmo, The New York Times Book Review). Nearly three quarters of a million copies have been sold, and the book became a much-loved, Academy Award-winning film starring Timothée Chalamet as the young Elio and Armie Hammer as Oliver, the graduate student with whom he falls in love. In Find Me, Aciman shows us Elio's father, Samuel, on a trip from Florence to Rome to visit Elio, who has become a gifted classical pianist. A chance encounter on the train with a beautiful young woman upends Sami's plans and changes his life forever. Elio soon moves to Paris, where he, too, has a consequential affair, while Oliver, now a New England college professor with a family, suddenly finds himself contemplating a return trip across the Atlantic. Aciman is a master of sensibility, of the intimate details and the emotional nuances that are the substance of passion. Find Me brings us back inside the magic circle of one of our greatest contemporary romances to ask if, in fact, true love ever dies.
Produktdetails
Autorenporträt
André Aciman
Rezensionen
Named an Goodreads, TIME and Vogue Best Book of 2019

"Aciman's quiet, label-free presentation of bisexual life represents a minor triumph . . . Likewise, his refusal to offer easy resolution, which infuses the whole romantic enterprise with a kind of delicious melancholy. There are moments, particularly in the final chapter, that may have readers gazing tearfully into their fireplaces, real or imaginary, just like Timothée Chalamet at the end of Luca Guadagnino's superlative film of 'Call Me by Your Name.'" -Charles Arrowsmith, The Washington Post

"[Find Me] is a lyrical meditation on being forced to move to another location after the party's over, on the Sisyphean task of trying to replicate the magic of young passion . . . it strikes an affectingly melancholy chord." -Josh Duboff, The New York Times Book Review

"You don't have to have read Call Me by Your Name, Aciman's 2007 bestselling novel turned Oscar-nominated movie, to immediately fall in love with this sexy, melancholic follow-up. It stands entirely separate, yet connected, a beautiful ode to the passage of time, to the lasting power of true love and the ache of loneliness . . . the revelations about who these characters have become unraveling slowly like a gorgeous piece of classical music." -Buzzfeed

"Call Me By Your Name was widely praised for its treatment of the nature of love, a theme that Find Me continues with subtlety and grace. Its treatment of the characters' psychology is astute and insightful, but what will ultimately drive reader interest is the question of whether star-crossed lovers Elio and Oliver will reunite. One can only hope." -Booklist (Starred Review)

"Love in all its sublime iterations is at the heart of Aciman's incandescent sequel to the acclaimed Call Me by Your Name . . . Aciman gifts readers with a beautiful 21st-century romance that reflects on the remembrance of things past and the courage to embrace the future. -Library Journal (Starred Review)

"With all of the richly painted details, emotional nuance, and deeply affecting romance as the first installment, this book will draw you in and make you believe in love again." -Good Housekeeping

"The sequel is just as maddeningly seductive as the original."-ELLE

"Elegant . . . Elio is the heart of the novel, as its core themes-including fatherhood, music, the nature of time and fate, the weight and promise of the past-are infused with eroticism, nostalgia and tenderness in fluid prose. The novel again demonstrates Aciman's capacity to fuse the sensual and the cerebral in stories that touch the heart." -Publishers Weekly

"[Find Me] is touching without being sentimental . . . An elegant, memorable story of enduring love across the generations." -Kirkus Reviews

"The focus of Find Me is the unlived life, the real life that comes to a standstill . . . Aciman's clever arrangement takes advantage of the frustrated desire of the reader to see Elio and Oliver reunited . . . Far more ambitious than Call Me by Your Name . . . great care has gone into the artistic shaping of this narrative."-Anne Serre, The Times Literary Supplement

"A structural marvel . . . proves itself indispensable to longtime readers and newcomers alike."-Garrett Biggs, The Chicago Review of Books

"Find Me is a sensual delight . . . Throughout his nonfiction and fiction, Aciman has maintained a profound preoccupation with memory and the responsibility of history. An aching sense of vulnerability and fearlessness drives this book past any question of whether or not a sequel was warranted." -Lauren LeBlanc, Observer

"Find Me is written in the same spiraling prose . . . full of grace, with some sentences approaching page length-that Call Me by Your Name was. I devoured the novel quickly, and on rereading have found myself unable to break away from Aciman's hypnotic rhythms."-Spencer Kornhaber, The Atlantic

"I'm relishing this indulgent sequel-sex, sculptures, food, villas: everything a person could want from a novel or from life." -Richie Hoffman, Poetry Foundation

"Aciman had his work cut out for himself in crafting a sequel as contemplative and gorgeous as Call Me by Your Name, which ended in its own coda of Elio's and Oliver's paths crossing years and years hence. Threading that needle perfectly, Aciman continues his story, parsing its very structure in his erudite, knowing style . . . Aciman's genius holds true and makes Find Me a splendid work in its own right." -Dave Wheeler, Shelf Awareness (Starred Review)

"Stubbornly unsentimental, but nevertheless beautiful . . . Find Me is, at heart, a meditation on how love bends and warps over time, but never quite disappears."-Kristin Iversen, Nylon

"This [book] functioned like a medical-grade SAD lamp in the dead of February. It is a lively novel about sentimental Americans in Italy who feel a wider range of emotions in seven minutes than most people do in a month." -Molly Young, Vulture

"A devastatingly honest reflection on the authenticity of love and life . . . Find Me is a truly remarkable achievement of love beyond the honeymoon teenage years."- Tomás Guerrero Jaramillo, Harvard Crimson