Tales of Life and Music 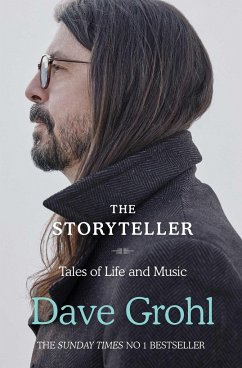 Tales of Life and Music

THE SUNDAY TIMES NO 1 BESTSELLER * ONE OF NME 's BEST MUSIC BOOKS OF 2021 * ONE OF VARIETY 'S BEST MUSIC BOOKS OF 2021 * INCLUDED IN AUDIBLE'S BEST OF THE YEAR LIST
So, I've written a book.
Having entertained the idea for years, and even offered a few questionable opportunities ('It's a piece of cake! Just do four hours of interviews, find someone else to write it, put your face on the cover, and voila!'), I have decided to write these stories just as I have always done, in my own hand. The joy that I have felt from chronicling these tales is not unlike listening back to a song that I've…mehr

So, I've written a book.

Having entertained the idea for years, and even offered a few questionable opportunities ('It's a piece of cake! Just do four hours of interviews, find someone else to write it, put your face on the cover, and voila!'), I have decided to write these stories just as I have always done, in my own hand. The joy that I have felt from chronicling these tales is not unlike listening back to a song that I've recorded and can't wait to share with the world, or reading a primitive journal entry from a stained notebook, or even hearing my voice bounce between the Kiss posters on my wall as a child.

This certainly doesn't mean that I'm quitting my day job, but it does give me a place to shed a little light on what it's like to be a kid from Springfield, Virginia, walking through life while living out the crazy dreams I had as young musician. From hitting the road with Scream at 18 years old, to my time in Nirvana and the Foo Fighters, jamming with Iggy Pop or playing at the Academy Awards or dancing with AC/DC and the Preservation Hall Jazz Band, drumming for Tom Petty or meeting Sir Paul McCartney at Royal Albert Hall, bedtime stories with Joan Jett or a chance meeting with Little Richard, to flying halfway around the world for one epic night with my daughters...the list goes on. I look forward to focusing the lens through which I see these memories a little sharper for you with much excitement.

Produktdetails
Produktdetails
Autorenporträt
Dave Grohl is an award-winning musician and director. He has been one of the most beloved and respected figures on the international music since his recorded debut with Nirvana on 1991's generation-defining Nevermind. Grohl took centre stage with Foo Fighters' 1995 self-titled debut album, and the band have gone on to win twelve Grammys and five Brit Awards. Their most recent album, Medicine at Midnight, went to No 1 on the UK charts. In 2013, Grohl made his debut as a feature director/producer with the acclaimed documentary Sound City. Grohl also directed the eight-part HBO docuseries Foo Fighters: Sonic Highways, which premiered in October 2014 and went on to win two Emmys.
Rezensionen
'Thoroughly entertaining... His tone remains unwavering: good-natured, self-deprecating and eternally positive. He reads as if he's bouncing on the spot. It's impossible not to be won over by him... With the flair of a natural raconteur, Grohl broadly makes the job of a rock superstar out to be tremendous fun... Sometimes the good guys do win.' Paul Rees Daily Express
"Candid, humble and full of stories about big-time stars...music lovers will want to put this one in heavy rotation." - CNN

"As Grohl himself sees it, he's a McCartney, not a Lennon, and if he's filling the world with silly love songs, the object of his affection tends to be existence itself." - Rolling Stone

"The message that burns through "The Storyteller" is to those who watch him onstage now: Deep down, I'm just like you. I've worked hard to get where I am, but I obsessed over the same music you do. I'm a fan." - Billboard

"Grohl, of Nirvana and Foo Fighters fame, demonstrates the good-naturedness he's known for in this heartfelt standout that explores everything from the loss of Kurt Cobain to the road to fatherhood." - Audible (Best of the Year list)

"... the world benefits just as much from hearing his inspiring stories told as only one of rock's great stadium rockers turned storyteller can tell them." - Forbes

"Both a timestamp of the past and a living example of what can be accomplished through creation. Lovers of chronicled melodic adventures and those seeking artistic inspiration will want to check it out." - Parade

"He may be a slight musical genius, but Grohl's journey from modest, punk-obsessed troublemaker, to drumming in the most popular band of the decade, to launching an enduring solo career that puts his rock and roll ethos at its center, is a truly inspiring tale." - Consequence of Sound

"The title "The Storyteller" fits perfectly. The book is filled with plainspoken, conversational prose that ably pulls readers into each tale, no matter how linear or digressive. The pages fly by, the memoir having the feel of a series of chats over drinks with a friend who just happens to have worked with nearly every notable mainstream and indie-rock musician of the last few decades." - Pittsburg Post-Gazette

Grohl candidly shares his reverence for the enduring power of music. . . Reflecting on his fame, Grohl writes, "I have never taken a single moment of it for granted." Paired with his sparkling wit, this humility is what makes Grohl's soulful story a cut above typical rock memoirs. There isn't a dull moment here. - Publishers Weekly (starred review)

"Grohl bares his soul and shares his passion in this must-read memoir, which will resonate with music lovers and his fans." - Library Journal (starred review)

Kinetic... Grohl writes with equal fervor about his path from "that guy from Nirvana" to the leader of the uberfamous Foo Fighters and his parenting experiences. An exciting read for fans and a remarkable perspective on the last 30 years of rock music." - Booklist