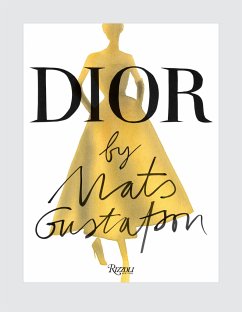 In this exquisite book, the watercolours and collages of Mats Gustafson replace the camera to capture the spirit and beauty of Dior.

Andere Kunden interessierten sich auch für
Produktbeschreibung
In this exquisite book, the watercolours and collages of Mats Gustafson replace the camera to capture the spirit and beauty of Dior.
Produktdetails
Autorenporträt
Mats Gustafson s fashion and portrait illustrations have been included in numerous publications, such as Vogue and Vogue Italia, the New Yorker, and Harper s Bazaar. His work has been exhibited internationally in solo and group shows.
Rezensionen
"This inspired collaboration, for the very first time from the noted Swedish illustrator, is devoted to the Dior collections from 2012 to 2017."
Society Diaries

"Works of Art: See couture beyond the lens of Instagram with Swedish iluustrastor Mats Gustafson's artsy ode to the storied French house. Inside you will find 150 dreamy renserings of Dior's designs fomr 2012 to 2017 using a vibrant palette of watercolors."
InStyle.com

"...the Year's Most Fashionable New Book...more than 200 pages of gorgeous renderings of works from the house of Dior's last five years.."
TownandCountrymag.com

"With his luminous watercolors, Swedish-born, U.S.-based illustrator Mats Gustafson has revived the 20th-century art of fashion illustration. Since 2012, he has worked closely with the house of Dior, capturing each season s looks in elegant silhouettes, building on the legacy of René Gruau, Christian Dior s longtime illustrator of choice. Dior by Mats Gustafson, a new book from Rizzoli, features his paintings from 25 Dior collections as well as studies from the archives."
Wall Street Journal

"...a rendering of the 2012 to 2017 collections in sumptuous watercolor and collage. In the age of Facebook Live, it s a lo-fi visual delight."
New York Times

"Physically this is a fashion volume that stands on its own among the genre especially when singularly viewed as a showcase for the exquisite and extraordinary artistry of Mats Gustafson. Its size befits the boldness of his illustrations as well as the statement that each makes."
New York Journal of Books