New History of Christianity in 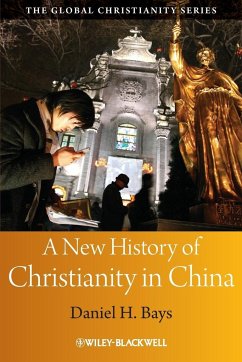 New History of Christianity in

Andere Kunden interessierten sich auch für
Produktbeschreibung
A New History of Christianity in China, written by one of the world's the leading writers on Christianity in China, looks at Christianity's long history in China, its extraordinarily rapid rise in the last half of the twentieth century, and charts its future direction. * Provides the first comprehensive history of Christianity in China, an important, understudied area in both Asian studies and religious history * Traces the transformation of Christianity from an imported, Western religion to a thoroughly Chinese religion * Contextualizes the growth of Christianity in China within national and local politics * Offers a portrait of the complex religious scene in China today * Contrasts China with other non-Western societies where Christianity is surging
Produktdetails
Autorenporträt
Daniel H. Bays is currently Professor of History and Director of the Asian Studies Program at Calvin College in Michigan. Previously he taught at the University of Kansas for 30 years. He is the author of several books on Chinese Christian history.
Inhaltsangabe
Acknowledgments. Introduction. 1. The Nestorian Age and the Mongol Mission, 635
1368. 2. The Jesuit Mission of Early Modern Times and Its Fate. 3. Protestant Beginnings, Catholics Redux, and China's First Indigenous Christians, 1800
1860. 4. Expansion and Institution
building in a Declining Dynasty, 1860
1902. 5. The "Golden Age" of Missions and the "Sino
Foreign Protestant Establishment," 1902
1927. 6. The Multiple Crises of Chinese Christianity, 1927
1950. 7. Christianity and the New China, 1950
1966. 8. The Chinese Church from the End of the Cultural Revolution to the Early Twenty
first Century. Appendix: The Russian Orthodox Church and Ecclesiastical Mission in China. Bibliography. Index.
Rezensionen
"A highly readable and up-to-date introduction to the history of Christianity in China by a long-term expert in the field ... [and] very enjoyable to read. It is highly recommended not only for students and scholars in the field of World Christianity, but also in the wider field of religion in China." (Journal of Chinese Religions, 1 May 2013)

"This compact volume presents a survey of the history of Christianity in China from the seventh century to the present." (The American Historical Review, 4 April 2014)

"Readability is one of the key strengths of this title, opening up the complexities of inculturation, missionary competition, centre versus periphery, and well as the changing nature of the dominant state policies governing Christianity to an audience which would otherwise have shined away from the topic. . . Daniel Bays should furthermore be congratulated because his New History shines a bright light into the complexities and secrets of contemporary Christianity in China." (The Journal of The Bulletin of the School of Oriental & African Studies, 1 August 2013)

"Given the scope and the complexity of the history of Christianity in China, the book is remarkably well organized." (China Review International, 1 April 2013)

"This succinctly written, groundbreaking work will no doubt become required reading for undergraduate and graduate students of world history and religious studies." (The Journal of Asian Studies, 1 September 2013)

"These praiseworthy books from Bays and Phan will enhance their readers' understanding of the manifold Christianities of China and Asia as well as of the global history of east-west relations." (Journal of Ecclesiastical History, 1 January 2013)

"This is an excellent text for both undergraduate classes and more advanced scholars of the subject, and even the well-read scholar of Chinese Christianity will find here helpful reminders, a driving n arrative line, and Bays' confident, collegial voice guiding them toward future research on topics that could not fit fully into this concise volume." (Social Sciences and Missions 25, 2012)

"This short, erudite, and accessible history of Chinese Christianity is set to become the best introduction available." (Church Times, 6 January 2012)

"Given the scholarly quality and historical timeliness of Bays's work, A New History of Christianity in China is an invaluable resource for any student of Chinese Christianity or any missionary desiring to serve the church there." (Themelios, 2011)

"I've really learned a lot from A New History of Christianity in China ... Bays is one of the leading scholars in the field and gives us an accessible, compact book ... This is a riveting history and Bays tells it fairly and evenly."--Asia Blog (http://asiasociety.org/blog/asia)
"[Bays] offers a comprehensive narrative that covers the waterfront, from Tibet and Mongolia in the west and north to Beijing and Macao in the east and south; from the Apostle Thomas in the church's very first generation to Bishop K. H. Ting in our own time; with discussion not just of abstract theological and ecclesiological debates but also of pragmatic political and cultural considerations ... He focuses not so much on the words and deeds of authority figures but, as much as the data permits, on the daily experience of China's Christian masses ... This book has my highest recommendation. It belongs in the library of every seminary and on the syllabus of every course on Asian church history." (Journal of Asian Mission)
"A concise and accessible overview as well as a convincing reinterpretation of the often tortuous transition of Christianity from a foreign creed to an indigenized and acculturated faith in a non-Western society ... While recent academic research has focused almost exclusively on prominent Chinese church leaders, the lives, beliefs, experiences, and attitudes of ordinary Christians have been sadly neglected. Daniel Bays is, therefore, to be congratulated for having devoted considerable space to Chinese indigenous churches, especially those with Pentecostal characteristics, notably the True Jesus Church and the Jesus Family ... This succinctly written, groundbreaking work will no doubt become required reading for undergraduate and graduate students of world history and religious studies." (The Journal of Asian Studies)

"It condenses a lifetime of profound engagement with Chinese Christianity--along with insights from the most significant scholarship in the field during the past several decades--into a single definitive volume. What he provides is not only the most complete coverage of Chinese Christianity to date, but also a new and convincing framework for understanding Christianity as a religion of the Chinese people. Its lucid, concise, and direct prose also makes it a pleasure to read." (China Review International)…mehr
Kundenbewertungen
Schreiben Sie eine Kundenbewertung zu diesem Produkt und gewinnen Sie mit etwas Glück einen 15,- EUR bücher.de–Gutschein!
Bewertung schreiben Bewertung schreiben
Mehr zum Thema