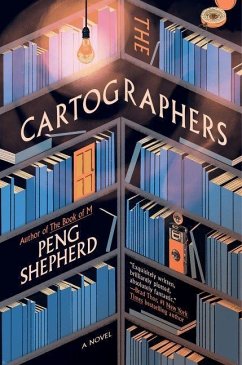 " The Cartographers is one of those brilliant books you have to read twice." - Washington Post
"There are echoes of Borges and Bradbury, Pynchon and Finian's Rainbow , but Ms. Shepherd's exhilarating and enjoyable work casts a magical glow all its own." - Wall Street Journal
From the critically acclaimed author of The Book of M , a highly imaginative thriller about a young woman who discovers that a strange map in her deceased father's belongings holds an incredible, deadly secret-one that will lead her on an extraordinary adventure and to the truth about her family's dark history.…mehr

Andere Kunden interessierten sich auch für
Produktbeschreibung
"The Cartographers is one of those brilliant books you have to read twice." - Washington Post

"There are echoes of Borges and Bradbury, Pynchon and Finian's Rainbow, but Ms. Shepherd's exhilarating and enjoyable work casts a magical glow all its own." - Wall Street Journal

From the critically acclaimed author of The Book of M, a highly imaginative thriller about a young woman who discovers that a strange map in her deceased father's belongings holds an incredible, deadly secret-one that will lead her on an extraordinary adventure and to the truth about her family's dark history.

What is the purpose of a map?

Nell Young's whole life and greatest passion is cartography. Her father, Dr. Daniel Young, is a legend in the field and Nell's personal hero. But she hasn't seen or spoken to him ever since he cruelly fired her and destroyed her reputation after an argument over an old, cheap gas station highway map.

But when Dr. Young is found dead in his office at the New York Public Library, with the very same seemingly worthless map hidden in his desk, Nell can't resist investigating. To her surprise, she soon discovers that the map is incredibly valuable and exceedingly rare. In fact, she may now have the only copy left in existence...because a mysterious collector has been hunting down and destroying every last one-along with anyone who gets in the way.

To answer that question, Nell embarks on a dangerous journey to reveal a dark family secret and discovers the true power that lies in maps...

Perfect for fans of Joe Hill and V. E. Schwab, The Cartographers is an ode to art and science, history and magic-a spectacularly imaginative, modern story about an ancient craft and places still undiscovered.

Produktdetails
Produktdetails
Autorenporträt
Peng Shepherd was born and raised in Phoenix, Arizona, where she rode horses and trained in classical ballet, and has lived in Beijing, Kuala Lumpur, London, New York, and Mexico City. Her second novel, The Cartographers, became a national bestseller, was named a Best Book of March by The Washington Post, and received a 2020 fellowship from the National Endowment for the Arts. Her debut, The Book of M, won the 2019 Neukom Institute for Literary Arts Award for Debut Speculative Fiction, and was chosen as a best book of the year by Amazon, Elle, Refinery29, and The Verge, as well as a best book of the summer by the Today show and NPR's On Point. When not writing, Peng can be found planning her next trip or haunting local bookstores.
Rezensionen
"Peng Shepherd's The Cartographers is... an enjoyable, fast-paced (and fantastical) thriller.... [Shepherd] nails the sense of deep-seated, profound connection and love between a small group of people drawn together by shared experience and interest, creating an intense familial bond....The tragedy of the book is what happens to that bond - and why. The Cartographers is both beautiful and intellectual, and Shepherd sticks the landing in a deeply satisfying fashion.... It's brilliant." - Washington Post

"The Cartographers is a memorable work of speculative fiction, filled with "phantom settlements," captivating flashbacks, alternate realities, ill-fated passion and enduring love. There are echoes of Borges and Bradbury, Pynchon and Finian's Rainbow, but Ms. Shepherd's exhilarating and enjoyable work casts a magical glow all its own." - Wall Street Journal

"Peng Shepherd has done it again! The Cartographers is an exquisitely written, brilliantly plotted, absolutely fantastic novel. A story like this reminds us of why we all fell in love with reading to begin with. Be prepared to be swept away on an incredible journey that will stay with you long after you turn the final page." - Brad Thor, #1 New York Times bestselling author of Black Ice

"Reminiscent of the work of Dan Brown, Shepherd's absorbing, inventive second novel showcases the art of mapmaking as one young woman's obsession puts her in the sights of a determined killer....Shepherd toys expertly with the known unknowns, how we navigate the gloomy backroads of the heart." - Oprah Daily on The Cartographers

"The Cartographers is wildly imaginative and totally mind-bending in the best possible way. Shepherd has crafted a juicy mystery masquerading as a grown-up scavenger hunt filled with astonishing twists and revelations. The result is a romp that's pure pleasure to read and will keep readers guessing" - Bookpage (starred review)

"The Cartographers is a story about magical maps that lead to your heart's desire, the sort of people who would do anything to find them, and the joy, regret, and possibility they bring. A vastly rich experience. I loved this book." - Charles Soule, author of The Oracle Year

"Cleverly imagined.... With an elaborately realized plot, fanatic cartographers, maps with surreal powers generated by phantom settlements (intentional errors), and many-faceted suspense, Shepherd contrasts science and art, obsession and love in a bedazzling metaphysical tale of lost and found." - Booklist on The Cartographers

"Shepherd plots page-turning twists and revelations with ease and excels in her knowledge of historical maps and cartographical mysteries. The inclusion of map diagrams and detailed flashbacks carry the reader right alongside Nell as she attempts to disentangle an increasingly complex, slightly supernatural secret. In an author's note, Shepherd promises that "something magical happens" when a person follows a map that lies, and this book will make you believe it. A highly inventive novel that pushes the boundaries of reality." - Kirkus Reviews on The Cartographers

"A shimmering delight, full of wonder, danger, and marvel. Suggest to readers of Erin Morgenstern, who has a similar ethos, and Natasha Pulley, who, like Shepherd, well knows how to end a story." - Library Journal on The Cartographers

"Shepherd's convincing blend of magic from old maps with the modern online world both delights and thrills." - Publishers Weekly (starred review) on The Cartographers

"Shepherd merges old-fashioned maps with modern technology for a labyrinth of a plot that surprises at every turn." - Sun-Sentinel (Florida) on The Cartographers

"In this dark fable, a young woman finds a strange map among her estranged father's things after his untimely death. Deadly secrets and gothic-inflected speculative fiction ensue." - New Scientist on The Cartographers

"Peng Shepherd flawlessly celebrates the ancient craft of cartography while taking readers on a thrilling journey of discovery." - Veranda on The Cartographers

"If you enjoyed John Green's Paper Towns, but always wanted to read a book about ghost maps written for adults . . . then The Cartographers is the book for you! . . . One of the cleverest mysteries of the year." - CrimeReads

"Peng Shepherd (The Book of M) is back with another page-turner.... Map mavens will revel in the unabashed cartography geekery throughout the novel." - Phoenix Magazine on The Cartographers

"These maps - old and new - their purposes, meanings and histories, drive a deeply absorbing, propulsive and philosophically satisfying thriller that is enhanced by elements of speculative fiction."
- Winnipeg Free Press on The Cartographers

"A wildly entertaining, imaginative ride with a cinematic plot that keeps the pages turning." - Real Simple on The Cartographers

"Perfect for fans of Joe Hill and V. E. Schwab, The Cartographers is an ode to art and science, history and magic-a spectacularly imaginative, modern story about an ancient craft and places still undiscovered." - Mystery Tribune

"One of the most original books I've read in a long while.... Shepherd (The Book of M) lays bare how reality and wishes, passion and pain can coexist and become explosive. For fans of Zakiya Dalila Harris' The Other Black Girls." - First Clue on The Cartographers

"[The Cartographers] is a thriller about a young, down-on-her-luck cartographer who is pulled into a complex conspiracy centering on the very map that led to the destruction of her career. As a lover of maps and mysteries, I enjoyed every twist and turn in this wonderful tale. Best enjoyed with a cup of tea and a cozy blanket. Background summer storm is a bonus!" - Sabaa Tahir, author of All My Rage and the An Ember in the Ashes quartet


"This is an apocalyptic thriller with heart. . . . The Book of M is devastating and inventive as Shepherd examines the value of memory, packing in imaginative twists as she goes." - USA Today on The Book of M

"I love a good dystopian page-turner, and Peng Shepherd's debut novel is the real deal. . . . Shepherd mixes in elements of multiple genres, like post-apocalyptic thriller and fantasy. But at its core, it's a meditation on memories and personhood, as Shepherd asks which one defines the other." - Elle on The Book of M

"Eerily magical . . . At the heart of the novel is a timeless question about the meaning of memory." - Time on The Book of M

"A beautiful and haunting story about the power of memory and the necessity of human connection, this book is a post-apocalyptic masterpiece and the one dystopian novel you really need to read this year." - Bustle on The Book of M

"I was both disturbed and inspired by Max's and Ory's journey through apocalypses large and small. Peng Shepherd has written a prescient, dark fable for the now and for the soon-to-be. The Book of M is our beautiful nightmare shadow." - Paul Tremblay, award-winning author of A Head Full of Ghosts and The Cabin at the End of the World, on The Book of M