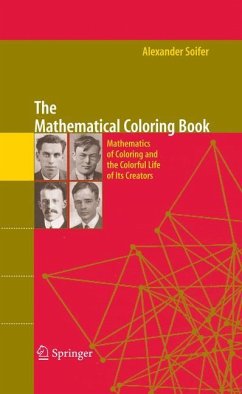 This book is dedicated to problems involving colored objects, and to results about the existence of certain exciting and unexpected properties that occur regardless of how these objects are colored. In mathematics, these results comprise the beautiful area known as Ramsey Theory. Wolfram's Math World defines Ramsey Theory as the mathematical study of combinatorial objects in which a certain degree of order must occur as the scale of the object becomes large . Ramsey Theory thus includes parts of many fields of mathematics, including combinatorics, geometry, and number theory. This book…mehr

"It contains a range of combinatorial colouring problems, while those interested in the recent history or the sociology of mathematics will be entertained by lively accounts of the combinatorialists who created and worked on them. ... The book is generally well written and presented, with good diagrams and layout ... . a useful and engaging book." (Robin Wilson, LMS Newsletter, November, 2009)

"This book contains much math of interest and pointers to more math of interest. ... This is a Fantastic Book!. ... The upward closure of the union of the following people: (1) an excellent high school student, (2) a very good college math major, (3) a good grad student in math or math-related field, (4) a fair PhD in combinatories, or (5) a bad math professor. ... Anyone who is interested in math or history of math. This book has plenty of both." (William Gasarch, SIGACT News, Vol. 40 (3), 2010)

"Soifer does a fine job in collating a huge range of sources ... with many interesting nuggets and, where necessary, a real determination to set the historical record straight in terms of the appellation of conjectures and theorems. ... The mathematical colouring book is attractively produced and very readable. ... book is likely to be of primary interest to those seeking a historically aware, up-to-date introductory survey of an engaging, and still emerging, field of combinatorial mathematics." (Nick Lord, The Mathematical Gazette, Vol. 95 (532), March, 2011)