The Grammar of Graphics (eBook, PDF) 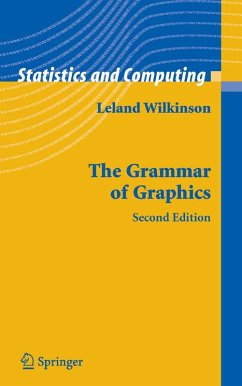 The Grammar of Graphics (eBook, PDF)

"This fascinating book deconstructs the process of producing graphics and in doing so raises many fascinating questions on the nature and representation of information...This second edition is almost twice the size of the original, with six new chapters and substantial revisions." Short Book Reviews of the International Statistical Institute, December 2005

"When the first edidtion of this book appeared in 2000 it was much praised. I called it a tour de force of the highest order. (Wainer, 2001), Edward Wegman (2000) argued that it was destined to become a classic. Now, six years later this very fine book has been much improved." Howard Wainer for Psychometrika

"...The second edition is an impressive expansion beyond a quite remarkable first edition. The text remains dense and even more encyclopedic, but it is a pleasure to read, whether a novice or an expert in graphics...this book is a bargain...The second edition is a must-have volume for anyone interested in graphics." Thomas E. Bradstreet for the Journal of the American Statistical Association, December 2006

"I find myself still thinking about the book and its ideas, several weeks after I finished reading it. I love that kind of book." Mark Bailey for Techometrics, Vol. 49, No. 1, February 2007

"Warts and all, The Grammar of Graphics is a richly rewarding work, an outstanding achievement by one of the leaders of statistical graphics. Seek it out." Nicholas J. Cox for the Journal of Statistical Software, January 2007

"The second edition is a quite fascinating book as well, and it comes with many color graphics. Anyone working in this field can see how many hours the author (plus coworkers) has spent on such a volume. ... Demands for good graphics are high and this book will help to wetten the appetite to create future computer packages that will meet this demand. An occasional reader will get insights into a modern world of computing ... ." (Wolfgang Polasek, Statistical Papers, Vol. 48, 2007)…mehr
Kundenbewertungen
Schreiben Sie eine Kundenbewertung zu diesem Produkt und gewinnen Sie mit etwas Glück einen 15,- EUR bücher.de–Gutschein!
Bewertung schreiben Bewertung schreiben
Mehr zum Thema