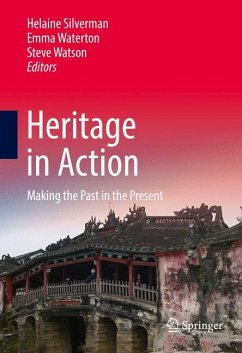 In this textbook we see heritage in action in indigenous and vernacular communities, in urban development and regeneration schemes, in expressions of community, in acts of nostalgia and memorialization and counteracts of forgetting, in museums and other spaces of representation, in tourism, in the offices of those making public policy, and in the politics of identity and claims toward cultural property.
Whether renowned or local, tangible or intangible, the entire heritage enterprise, at whatever scale, is by now inextricably embedded in "value".
The global context requires a sanguine…mehr

Andere Kunden interessierten sich auch für
Produktbeschreibung
In this textbook we see heritage in action in indigenous and vernacular communities, in urban development and regeneration schemes, in expressions of community, in acts of nostalgia and memorialization and counteracts of forgetting, in museums and other spaces of representation, in tourism, in the offices of those making public policy, and in the politics of identity and claims toward cultural property.

Whether renowned or local, tangible or intangible, the entire heritage enterprise, at whatever scale, is by now inextricably embedded in "value".

The global context requires a sanguine approach to heritage in which the so-called critical stance is not just theorized in a rarefied sphere of scholarly lexical gymnastics, but practically engaged and seen to be doing things in the world.


Produktdetails
Autorenporträt
Helaine Silverman is Professor in the Department of Anthropology at the University of Illinois and Director of the Collaborative for Cultural Heritage Management and Policy (CHAMP) at UI. She is interested in the cultural politics of heritage production and management, tourism and economic development, and local and national imaginaries of identity. In addition to her authored works and edited volumes, she serves on the editorial boards of American Anthropologist, International Journal of Heritage Studies, Heritage & Society, World Art, and Thema. Her current research projects are "Tourism, Heritage and Identity in Cuzco, Peru", "World Heritage and Community at Cahokia-Collinsville, Illinois" and "Heritage Promotion at the Ironbridge Gorge World Heritage Site, UK." Professor Silverman is an expert member of ICOMOS' international scientific committees on Archaeological Heritage Management (ICAHM) and Cultural Tourism (ICTC). She is also a Visiting Research Fellow at Ironbridge International Institute for Cultural Heritage at the University of Birmingham. Emma Waterton is an Associate Professor in the Geographies of Heritage at the University of Western Sydney, Australia. She works in the area of Heritage Studies. Before taking up her post at UWS in 2010, she held an RCUK Academic Fellowship in the areas of History and Heritage at Keele University. Her research interests emphasize community heritage, representations of the past and the critical analysis public policy, especially those tackling social inclusion, multiculturalism and expressions of national identity. Together, these interests challenge the dominant conceptualizations of heritage found in policy, which tend to privilege the cultural symbols of a particular social group. In particular, her work attempts to illustrate how and why, despite attempts to mitigate instances of exclusion, recent policies continue to lean towards the predictable melding of cultural diversity with tendencies of assimilation. Emma has a prolific publication record including a sole authored book and two co-authored books, as well as multiple edited volumes. She also has published peer-reviewed journal articles and book chapters, both sole authored and jointly authored. In addition she has been extremely successful in obtaining major grants for her heritage fieldwork including a prestigious multi-year ARC Discovery Early Career Researcher Award. Emma's current research projects are the following: Photos of the Past: The Negotiation of Identity and Belonging at Australian Tourism Sites; Memorialization and Affect: Remembering Pearl Harbor; Interpretive Signage and the Representation of Indigenous History in Australian Protected Areas; ANZAC Thanatourism; Heritage Tourism in Hiroshima. Steve Watson taught a range of subjects in undergraduate programs in business management and tourism management and in postgraduate programs in marketing at York St John University, UK. He also supervised doctoral students in the field of cultural tourism and tourism development. His main research interest was cultural and heritage tourism and he was a leading expert in this field having published books and papers exploring the interactions between heritage, culture, tourism and communities. He had extensive experience working in the public sector and conducted research for a number of local authorities and other organizations, including English Heritage. He taught in several universities in the UK including Edinburgh, York, John Moores and Hull and had given guest lectures in universities in the United Kingdom, the United States, Spain and Australia. Apart from his academic responsibilities he was active in the tourism industry working with groups and individuals to develop and enhance tourism for the benefit of the local economy. Steve was one of the founding members of the Association of Critical Heritage Studies, an international organization dedicated to the study of heritage as a social and cultural practice. He was on the editorial boards of two international journals and was book reviews editor for both. He regularly reviewed books and contributions for other academic journals and worked with scholars from around the world on a variety of projects. Steve was a non-executive director of Visit York and had been instrumental in developing its research program.
Inhaltsangabe
Part I: Introduction.- 1. An Introduction to Heritage in Action (Emma Waterton, Steve Watson and Helaine Silverman).- Part II: Making and Remaking Heritage.- 2. The Case for Ethical Guidelines: Preventing Conflict in the Selection of World Heritage Sites (Michael Angelo Liwanag).- 3. Restoring a Nyingma Buddhist Monastery, Nepal (Hayley Saul and Emma Waterton).- 4. Reconnections (Steve Watson and Emma Waterton).- Part III: Stakeholder Challenges.- 5. The Formation of Heritage Elites: Talking Rights and Practicing Privileges in an Afro-Colombian Community (Maria Fernanda Escallon).- 6. Ethical or Empty Gestures?: World Heritage Nominations in Conflictual Contexts (Helen Human) .- 7. Encountering Migration Heritage in a National Park (Denis Byrne).- Part IV: Memories of War.- 8. Critical Heritage Debates and the Commemoration of the First World War: Productive Nostalgia and Discourses of Respectful Reverence during the Centenary (David C. Harvey).- 9. Lapland's Dark Heritage: Responses to the Legacy of World War II (Eerika Koskinen-Koivisto and Suzie Thomas).- Part V: Urban Contexts.- 10. Heritage Activism and Cultural Rights: The Case of the New Acropolis Museum (Kalliopi Fouseki and Maria Shehade).- 11. Public Perception and Conservation: The Case of Alexandria's Built Heritage (Lama Said and Yomna Borg).- Part VI: New Mobilities.- 12. What of Heritage in a Mobile World? Negotiating Heritage/Tourism/Community in Luang Prabang, Laos (Russell Staiff and Robyn Bushell).- 13. Heritage on the Go: Abbreviated Heritage in a Mobile World (Helaine Silverman).- 14. Moveable Feasts: Food as Revitalizing Cultural Heritage (Michael A. Di Giovine, Jonathan B. Mabry, and Teresita Majewski).- 15. Technologies, Technocracy and the Promise of 'Alternative' Heritage Values (Trinidad Rico).
Kundenbewertungen
Schreiben Sie eine Kundenbewertung zu diesem Produkt und gewinnen Sie mit etwas Glück einen 15,- EUR bücher.de–Gutschein!
Bewertung schreiben Bewertung schreiben
Mehr zum Thema