Introduction to Calculus and Analysis II/1 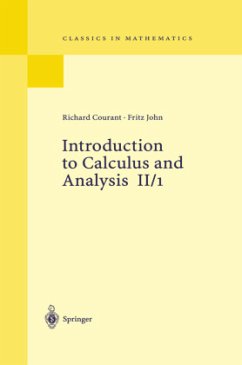 Introduction to Calculus and Analysis II/1

Richard Courant was born in 1888 in a small town of what is now Poland, and died in New Rochelle, N.Y. in 1972. He received his doctorate from the legendary David Hilbert in Göttingen, where later he founded and directed its famed mathematics Institute, a Mecca for mathematicians in the twenties. In 1933 the Nazi government dismissed Courant for being Jewish, and he emigrated to the United States. He found, in New York, what he called "a reservoir of talent" to be tapped. He built, at New York University, a new mathematical Sciences Institute that shares the philosophy of its illustrious…mehr

"These books (Introduction to Calculus and Analysis Vol. I/II) are very well written. The mathematics are rigorous but the many examples that are given and the applications that are treated make the books extremely readable and the arguments easy to understand. These books are ideally suited for an undergraduate calculus course. Each chapter is followed by a number of interesting exercises. More difficult parts are marked with an asterisk. There are many illuminating figures...Of interest to students, mathematicians, scientists and engineers. Even more than that." -- Newsletter on Computational and Applied Mathematics, 1991