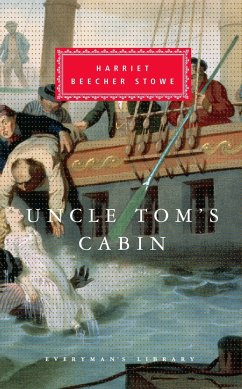 Uncle Tom, Topsy, Sambo, Simon Legree, little Eva: their names are American bywords, and all of them are characters in Harriet Beecher Stowe's remarkable novel of the pre-Civil War South. Uncle Tom's Cabin was revolutionary in 1852 for its passionate indictment of slavery and for its presentation of Tom, "a man of humanity," as the first black hero in American fiction. Labeled racist and condescending by some contemporary critics, it remains a shocking, controversial, and powerful work -- exposing the attitudes of white nineteenth-century society toward "the peculiar institution" and…mehr

Andere Kunden interessierten sich auch für
Produktbeschreibung
Uncle Tom, Topsy, Sambo, Simon Legree, little Eva: their names are American bywords, and all of them are characters in Harriet Beecher Stowe's remarkable novel of the pre-Civil War South. Uncle Tom's Cabin was revolutionary in 1852 for its passionate indictment of slavery and for its presentation of Tom, "a man of humanity," as the first black hero in American fiction. Labeled racist and condescending by some contemporary critics, it remains a shocking, controversial, and powerful work -- exposing the attitudes of white nineteenth-century society toward "the peculiar institution" and documenting, in heartrending detail, the tragic breakup of black Kentucky families "sold down the river." An immediate international sensation, Uncle Tom's Cabin sold 300,000 copies in the first year, was translated into thirty-seven languages, and has never gone out of print: its political impact was immense, its emotional influence immeasurable.
Produktdetails
Autorenporträt
Harriet Beecher Stowe, a prolific writer best remembered today for Uncle Tom's Cabin, was born in Litchfield, Connecticut, on June 14, 1811, into a prominent New England family. Her father, Lyman Beecher, was a well-known Congregational minister, and her brother Henry Ward Beecher became a distinguished preacher, orator, and lecturer. Like all the Beechers she grew up with a strong sense of wanting to improve humanity. At the age of thirteen Harriet Beecher enrolled in the Hartford Female Seminary and subsequently taught there until 1832, when the family moved to Cincinnati. In Ohio she was an instructor at a school founded by her elder sister Catharine, and she soon began publishing short stories in the Western Monthly Magazine. Four years later, in 1836, Harriet Beecher married Calvin Stowe, a respected biblical scholar and theologian by whom she had seven children. In order to supplement the family's meager income she continued writing. The Mayflower, her first collection of stories and sketches, appeared in 1843. During this period abolitionist conflicts rocked Cincinnati, and Mrs. Stowe witnessed firsthand the misery of slaves living just across the Ohio River in Kentucky. But not until the passage of the Fugitive Slave Act of 1850 was she inspired to write about their plight. After the family resettled in Brunswick, Maine, when Mr. Stowe was hired as a professor at Bowdoin College, she began working on a novel that would expose the evils of slavery. First serialized in the National Era, an abolitionist paper, in forty weekly installments between June 5, 1851, and April 1, 1852, and published as a book on March 20, 1852, Uncle Tom's Cabin was an enormous success. Tolstoy deemed it a great work of literature 'flowing from love of God and man,' and within a year the book had sold more than 300,000 copies. When Uncle Tom's Cabin appeared in Great Britain Queen Victoria sent Mrs. Stowe a note of gratitude, and enthusiastic crowds greeted the author in London on her first trip abroad in 1853. In an attempt to silence the many critics at home who denounced the work as vicious propaganda, Mrs. Stowe brought out A Key to Uncle Tom's Cabin in 1853, which contained documentary evidence substantiating the graphic picture of slavery she had drawn. Dred (1856), a second antislavery novel, did not enjoy the acclaim of Uncle Tom's Cabin, yet the author had already stirred the conscience of the nation and the world, fueling sentiments that would ignite the Civil War. When Abraham Lincoln met her at the White House in 1862 he allegedly remarked: 'So you're the little woman who wrote the book that started this great war!' In subsequent novels Stowe shifted her attention away from the issue of slavery. Beginning with The Minister's Wooing (1859), and continuing with The Pearl of Orr's Island (1862), Oldtown Folks (1869), and Poganuc People (1878), she presented a perceptive and realistic chronicle of colonial New England, focusing especially on the theological warfare that underscored Puritan life. In a second and less popular series of novels-My Wife and I (1871), Pink and White Tyranny (1871), and We and Our Neighbors (1875)-she depicted the mores of post-Civil War America. Mrs. Stowe did enjoy success, however, with the controversial Lady Byron Vindicated (1870), a bold defense of her friend Anne, Lady Byron, that scandalously revealed Lord Byron's moral delinquency. In addition she became a regular contributor to the Atlantic Monthly, which published many of the memorable short stories later collected in Oldtown Fireside Stories (1872) and Sam Lawson's Oldtown Fireside Stories (1881). Harriet Beecher Stowe wrote little during the last years of her life. She died in Hartford, Connecticut, on July 1, 1896. Perhaps Mrs. Stowe's achievement was best summed up by abolitionist Frederick Douglass who said: "Hers was the word for the hour."
Kundenbewertungen
Schreiben Sie eine Kundenbewertung zu diesem Produkt und gewinnen Sie mit etwas Glück einen 15,- EUR bücher.de–Gutschein!
Bewertung schreiben Bewertung schreiben