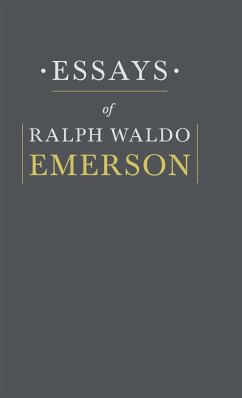 Emerson's Essays By Ralph Waldo Emerson. Contents Include: History Self-Reliance Compensation Spiritual Laws Loves Friendship Prudence Heroism The over-soul Circles Intellect Art. Many of the earliest books, particularly those dating back to the 1900s and before, are now extremely scarce and increasingly expensive. Obscure Press are republishing these classic works in affordable, high quality, modern editions, using the original text and artwork.…mehr

Andere Kunden interessierten sich auch für
Produktbeschreibung
Emerson's Essays By Ralph Waldo Emerson. Contents Include: History Self-Reliance Compensation Spiritual Laws Loves Friendship Prudence Heroism The over-soul Circles Intellect Art. Many of the earliest books, particularly those dating back to the 1900s and before, are now extremely scarce and increasingly expensive. Obscure Press are republishing these classic works in affordable, high quality, modern editions, using the original text and artwork.
Produktdetails
Produktdetails
Autorenporträt
Ralph Waldo Emerson (May 25, 1803 - April 27, 1882) was an American essayist, lecturer, philosopher, and poet who led the transcendentalist movement of the mid-19th century. He was seen as a champion of individualism and a prescient critic of the countervailing pressures of society, and he disseminated his thoughts through dozens of published essays and more than 1,500 public lectures across the United States. Emerson gradually moved away from the religious and social beliefs of his contemporaries, formulating and expressing the philosophy of transcendentalism in his 1836 essay "Nature". Following this work, he gave a speech entitled "The American Scholar" in 1837, which Oliver Wendell Holmes Sr. considered to be America's "intellectual Declaration of Independence. Emerson wrote most of his important essays as lectures first and then revised them for print. His first two collections of essays, Essays: First Series (1841) and Essays: Second Series (1844), represent the core of his thinking. They include the well-known essays "Self-Reliance",[7] "The Over-Soul", "Circles", "The Poet", and "Experience." Together with "Nature",[8] these essays made the decade from the mid-1830s to the mid-1840s Emerson's most fertile period. Emerson wrote on a number of subjects, never espousing fixed philosophical tenets, but developing certain ideas such as individuality, freedom, the ability for mankind to realize almost anything, and the relationship between the soul and the surrounding world. Emerson's "nature" was more philosophical than naturalistic: "Philosophically considered, the universe is composed of Nature and the Soul." Emerson is one of several figures who "took a more pantheist or pandeist approach by rejecting views of God as separate from the world. He remains among the linchpins of the American romantic movement,[10] and his work has greatly influenced the thinkers, writers and poets that followed him. "In all my lectures," he wrote, "I have taught one doctrine, namely, the infinitude of the private man."[11]Emerson is also well known as a mentor and friend of Henry David Thoreau, a fellow transcendentalist. Emerson was born in Boston, Massachusetts, on May 25, 1803,] a son of Ruth Haskins and the Rev. William Emerson, a Unitarianminister. He was named after his mother's brother Ralph and his father's great-grandmother Rebecca Waldo. Ralph Waldo was the second of five sons who survived into adulthood; the others were William, Edward, Robert Bulkeley, and Charles. Three other children-Phebe, John Clarke, and Mary Caroline-died in childhood.] Emerson was entirely of English ancestry, and his family had been in New England since the early colonial period. Emerson's father died from stomach cancer on May 12, 1811, less than two weeks before Emerson's eighth birthday.[17] Emerson was raised by his mother, with the help of the other women in the family; his aunt Mary Moody Emerson in particular had a profound effect on him.[18] She lived with the family off and on and maintained a constant correspondence with Emerson until her death in 1863.
Kundenbewertungen
Schreiben Sie eine Kundenbewertung zu diesem Produkt und gewinnen Sie mit etwas Glück einen 15,- EUR bücher.de–Gutschein!
Bewertung schreiben Bewertung schreiben
Bewertung schreiben Bewertung schreiben