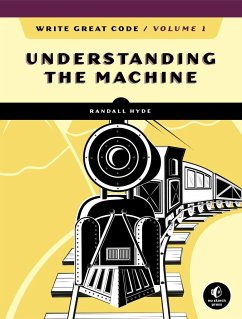 Understanding the Machine , the first volume in the landmark Write Great Code series by Randall Hyde, explains the underlying mechanics of how a computer works.
This, the first volume in Randall Hyde's Write Great Code series, dives into machine organization without the extra overhead of learning assembly language programming. Written for high-level language programmers, Understanding the Machine fills in the low-level details of machine organization that are often left out of computer science and engineering courses.
Learn: How the machine represents numbers, strings, and high-level…mehr

Learn:
How the machine represents numbers, strings, and high-level data structures, so you'll know the inherent cost of using them.
How to organize your data, so the machine can access it efficiently.
How the CPU operates, so you can write code that works the way the machine does.
How I/O devices operate, so you can maximize your application's performance when accessing those devices.
How to best use the memory hierarchy to produce the fastest possible programs.

Great code is efficient code. But before you can write truly efficient code, you must understand how computer systems execute programs and how abstractions in programming languages map to the machine's low-level hardware. After all, compilers don't write the best machine code; programmers do. This book gives you the foundation upon which all great software is built.

"Today's programmers can hardly keep up with the race against inhumane deadlines and new technologies; therefore, they rarely have a chance to learn the basics of computer architectures and the inner-working of their programming languages. This book fills in the gaps. I strongly recommend it."
InformIT.com

Write Great Code "isn't your typical 'teach yourself to program' book. . . It's relevant to all languages, and all levels of programming experience. . . Run, don't walk, to buy and read this book."
Bay Area Large Installation System Administrators (BayLISA)

5/5 stars: "[Write Great Code] fills in the blanks nicely and really could be part of a Computer Science degree required reading set... Once this book is read, you will have a greater understanding and appreciation for code that is written efficiently - and you may just know enough to do that yourself. At least you will have a great start at the art of crafting efficient software."
MacCompanion