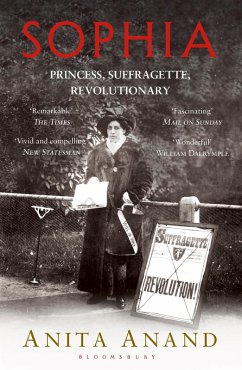 'Sophia is the sort of remarkable, almost unbelievable untold true story that every writer dreams of chancing upon. A wonderful debut, written with real spirit and gusto. Anita Anand has produced a winner' William Dalrymple
'A fascinating and elegantly written life of one of the unknown giants of women's suffrage' Katie Hickman, author of Daughters of Britannia

'A fascinating and elegantly written life of one of the unknown giants of women's suffrage' Katie Hickman, author of Daughters of Britannia

Winner of the Eastern Eye Alchemy Festival Award for Literature

In 1876 Sophia Duleep Singh was born into royalty. Her father, Maharajah Duleep Singh, was heir to the Kingdom of the Sikhs, a realm that stretched from the lush Kashmir Valley to the craggy foothills of the Khyber Pass and included the mighty cities of Lahore and Peshawar. It was a territory irresistible to the British, who plundered everything, including the fabled Koh-I-Noor diamond.

Exiled to England, the dispossessed Maharajah transformed his estate at Elveden in Suffolk into a Moghul palace, its grounds stocked with leopards, monkeys and exotic birds. Sophia, god-daughter of Queen Victoria, was raised a genteel aristocratic Englishwoman: presented at court, afforded grace-and-favour lodgings at Hampton Court Palace and photographed wearing the latest fashions for the society pages. But when, in secret defiance of the British government, she travelled to India, she returned a revolutionary.

Sophia transcended her heritage to devote herself to battling injustice and inequality,a far cry from the life to which she was born. Her causes were the struggle for Indian independence, the fate of the Lascars, the welfare of Indian soldiers in the First World War - and, above all, the fight for female suffrage. She was bold and fearless, attacking politicians, putting herself in the front line and swapping her silks for a nurse's uniform to tend wounded soldiers evacuated from the battlefields. Meticulously researched and passionately written, this enthralling story of the rise of women and the fall of empire introduces an extraordinary individual and her part in the defining moments of recent British and Indian history.


Produktdetails
Produktdetails
Autorenporträt
Anita Anand has been a radio and television journalist for almost twenty years. She is the presenter of Any Answers, the political phone-in programme on BBC Radio 4. During her career, she has also presented Drive, Doubletake and the Anita Anand Show on Radio 5 Live, and Saturday Live, The Westminster Hour, Beyond Westminster, Midweek and Woman's Hour on Radio 4. On BBC television she has presented The Daily Politics, The Sunday Politics and Newsnight. She has interviewed five Indian Prime Ministers, three from Pakistan, two from Great Britain and one from Bangladesh. She lives in west London. Sophia is her first book. It is the winner of the Eastern Eye Alchemy Festival Award for Literature and was shortlisted for the Slightly Foxed Best First Biography Prize.