Quantum Worlds and the Emergence of Spacetime 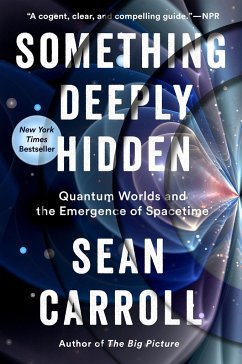 Quantum Worlds and the Emergence of Spacetime

INSTANT NEW YORK TIMES BESTSELLER A Science News favorite science book of 2019
As you read these words, copies of you are being created.
Sean Carroll, theoretical physicist and one of this world s most celebrated writers on science, rewrites the history of twentieth-century physics. Already hailed as a masterpiece, Something Deeply Hidden shows for the first time that facing up to the essential puzzle of quantum mechanics utterly transforms how we think about space and time. His reconciling of quantum mechanics with Einstein s theory of relativity changes, well, everything.
Most…mehr

As you read these words, copies of you are being created.

Sean Carroll, theoretical physicist and one of this world s most celebrated writers on science, rewrites the history of twentieth-century physics. Already hailed as a masterpiece, Something Deeply Hidden shows for the first time that facing up to the essential puzzle of quantum mechanics utterly transforms how we think about space and time. His reconciling of quantum mechanics with Einstein s theory of relativity changes, well, everything.

Most physicists haven t even recognized the uncomfortable truth: Physics has been in crisis since 1927. Quantum mechanics has always had obvious gaps which have come to be simply ignored. Science popularizers keep telling us how weird it is, how impossible it is to understand. Academics discourage students from working on the "dead end" of quantum foundations. Putting his professional reputation on the line with this audacious yet entirely reasonable book, Carroll says that the crisis can now come to an end. We just have to accept that there is more than one of us in the universe. There are many, many Sean Carrolls. Many of every one of us.

Copies of you are generated thousands of times per second. The Many-Worlds theory of quantum behavior says that every time there is a quantum event, a world splits off with everything in it the same, except in that other world the quantum event didn't happen. Step-by-step in Carroll's uniquely lucid way, he tackles the major objections to this otherworldly revelation until his case is inescapably established.

Rarely does a book so fully reorganize how we think about our place in the universe. We are on the threshold of a new understanding of where we are in the cosmos, and what we are made of.

Produktdetails
Autorenporträt
SEAN CARROLL is a theoretical physicist at the California Institute of Technology, host of the Mindscape podcast, and author of From Eternity to Here, The Particle at the End of the Universe, and The Big Picture. He has been awarded prizes and fellowships by the National Science Foundation, NASA, the American Institute of Physics, and the Royal Society of London, among many others. He lives in Los Angeles with his wife, writer Jennifer Ouellette.
Rezensionen
Praise for Something Deeply Hidden

What makes Carroll's new project so worthwhile, though, is that while he is most certainly choosing sides in the debate, he offers us a cogent, clear, and compelling guide to the subject while letting his passion for the scientific questions shine through every page. NPR

Something Deeply Hidden is Carroll s ambitious and engaging foray into what quantum mechanics really means and what it tells us about physical reality. Science

Carroll argues with a healthy restlessness that makes his book more interesting than so many others in the quantum physics genre. Forbes

If you want to know why some people take [the Everett] approach seriously and what you can do with it, then Carroll s latest is one of the best popular books on the market. Physics Today

Be prepared to deal with some equations and to have your mind blown. GeekWire

By far the most articulate and cogent defense of the Many-Worlds view in book-length depth with a close connection to the latest ongoing research. Science News

As a smart and intensely readable undergraduate class in the history of quantum theory and the nature of quantum mechanics, Something Deeply Hidden could scarcely be improved. Steve Donoghue, Open Letters Monthly

Readers in this universe (and others?) will relish the opportunity to explore the frontiers of science in the company of titans. Booklist

[A] challenging, provocative book . . . Moving smoothly through different topics and from objects as small as particles to those as enormous as black holes, Carroll s exploration of quantum theory introduces readers to some of the most groundbreaking ideas in physics today. Publishers Weekly

A thrilling tour through what is perhaps humankind's greatest intellectual achievement quantum mechanics. With bold clarity, Carroll deftly unmasks quantum weirdness to reveal a strange but utterly wondrous reality. Brian Greene, professor of physics and mathematics, director of Columbia's Center for Theoretical Physics, and author of The Elegant Universe

Sean Carroll s immensely enjoyable Something Deeply Hidden brings readers face to face with the fundamental quantum weirdness of the universe or should I say universes? And by the end, you may catch yourself finding quantum weirdness not all that weird. Jordan Ellenberg, professor of mathematics at the University of Wisconsin Madison and author of How Not To Be Wrong

Sean Carroll is always lucid and funny, gratifyingly readable, while still excavating depths. He advocates an acceptance of quantum mechanics at its most minimal, its most austere appealing to the allure of the pristine. The consequence is an annihilation of our conventional notions of reality in favor of an utterly surreal world of Many-Worlds. Sean includes us in the battle between a simple reality versus a multitude of realities that feels barely on the periphery of human comprehension. He includes us in the ideas, the philosophy, and the foment of revolution. A fascinating and important book. Janna Levin, professor of physics and astronomy at Barnard College and author of Black Hole Blues

Sean Carroll beautifully clarifies the debate about the foundations of quantum mechanics and champions the most elegant, courageous approach: the astonishing 'Many-Worlds' interpretation. His explanations of its pros and cons are clear, evenhanded, and philosophically gob smacking. Steven Strogatz, professor of mathematics at Cornell University and author of Infinite Powers

Carroll gives us a front-row seat to the development of a new vision of physics: one that connects our everyday experiences to a dizzying hall-of-mirrors universe in which our very sense of self is challenged. It's a fascinating idea, and one that just might hold clues to a deeper reality. Katie Mack, theoretical astrophysicist at North Carolina State University and author of The End of Everything

I was overwhelmed by tears of joy at seeing so many fundamental issues explained as well as they ever have been. Something Deeply Hidden is a masterpiece, which stands along with Feynman's QED as one of the two best popularizations of quantum mechanics I've ever seen. And if we classify QED as having had different goals, then it's just the best popularization of quantum mechanics I've ever seen, full stop. Scott Aaronson, professor of computer science at the University of Texas at Austin and director of UT Austin's Quantum Information Center

Irresistible and an absolute treat to read. While this is a book about some of the deepest current mysteries in physics, it is also a book about metaphysics, as Carroll lucidly guides us on how to not only think about the true and hidden nature of reality but also how to make sense of it. I loved this book. Priyamvada Natarajan, theoretical astrophysicist at Yale University and author of Mapping the Heavens…mehr
'Carroll takes us by the hand and with a benign smile and a chatty style, leads us to a place where...at every instant an almost infinite number of copies of you are splitting off to live alternative lives... a wild conceptual ride.'
Sunday Times, BOOKS OF THE YEAR
Kundenbewertungen
Schreiben Sie eine Kundenbewertung zu diesem Produkt und gewinnen Sie mit etwas Glück einen 15,- EUR bücher.de–Gutschein!
Bewertung schreiben Bewertung schreiben
Mehr zum Thema