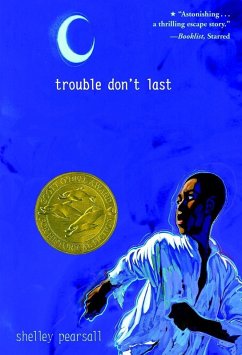 Eleven-year-old Samuel was born as Master Hackler's slave, and working the Kentucky farm is the only life he's ever known—until one dark night in 1859, that is. With no warning, cranky old Harrison, a fellow slave, pulls Samuel from his bed and, together, they run. The journey north seems much more frightening than Master Hackler ever was, and Samuel's not sure what freedom means aside from running, hiding, and starving. But as they move from one refuge to the next on the Underground Railroad, Samuel uncovers the secret of his own past—and future. And old Harrison begins to see past a whole…mehr

Andere Kunden interessierten sich auch für
Produktbeschreibung
Eleven-year-old Samuel was born as Master Hackler's slave, and working the Kentucky farm is the only life he's ever known—until one dark night in 1859, that is. With no warning, cranky old Harrison, a fellow slave, pulls Samuel from his bed and, together, they run. The journey north seems much more frightening than Master Hackler ever was, and Samuel's not sure what freedom means aside from running, hiding, and starving. But as they move from one refuge to the next on the Underground Railroad, Samuel uncovers the secret of his own past—and future. And old Harrison begins to see past a whole lifetime of hurt to the promise of a new life—and a poignant reunion— in Canada. In a heartbreaking and hopeful first novel, Shelley Pearsall tells a suspenseful, emotionally charged story of freedom and family. Trouble Don't Last includes an historical note and map.

Produktdetails
Produktdetails
Autorenporträt
A former middle school teacher and historian, Shelley Pearsall is now working on her next historical novel and leading writing workshops for children. Trouble Don't Last is her first novel. Pearsall did extensive research while writing Trouble Don't Last and traveled to towns along the escape routeincluding crossing the Ohio River in a boat and visiting a community in Chatham, Ontario, another destination for runaway slaves. I've found that learning about history in an imaginative way often sticks with students longer than review questions in a text-book, says Pearsall. AUTHOR'S NOTE The Underground Railroad is a familiar American story. It is filled with dramatic tales of secret rooms, brave abolitionists, and midnight journeys. But sometimes the real heroes of the storythe runaways themselvesare left in the background. What did they think and feel as they tried to reach freedom? What was their journey like? Whom did the runaways trust and whom did they fear? This book grew from my wondering about these questions. . . . In my research, I learned that the Underground Railroad was not a clear, organized network that led runaways from the South to the North. Actually, the term referred to any safe routes or hiding places used by runawaysso there were hundreds, even thousands of "underground railroads." Most runaways traveled just the way that Samuel and Harrison didusing whatever temporary hiding places or means of transportation they could find. As the number of actual railroad lines increased throughout the country in the 1850's, some runaways even hid on railroad cars when travelling from one place to another. They called this "riding the steam cars" or "going the faster way." I also discovered that runaways were not as helpless or ill-prepared as they are sometimes portrayed. Historical records indicate that many slaves planned carefully for their journey. They brought provisions such as food and extra clothing with them. Since transportation and guides could cost money, some slaves saved money for their escape, while others, like Samuel and Harrison, received money from individuals they met during their journey. White abolitionists and sympathetic religious groups like the Quakers aided many runaways on the Underground Railroad. However, free African Americans played an equally important role. They kept runaways in their homes and settlements, and served as guides, wagon drivers, and even decoys. In fact, the character of the river man is based on the real-life story of a black Underground Railroad guide named John P. Parker. Like the River Man, John Parker was badly beaten as a young slave, and so he never traveled anywhere without a pistol in his pocket and a knife in his belt. During a fifteen year period, he ferried more than 400 runaways across the Ohio River, and a $ 1000 reward was once offered for his capture. After the Civil War, he became a successful businessman in Ripley, Ohio, and patent several inventions. I am often asked what other parts of the novel are factual. The gray yarn being sent as a sign? The baby buried below the church floor? Lung fever? Guides named Ham and Eggs? The answer is yes. Most of the events and names used in this novel are real, but they come from many different sources. I discovered names like Ordee Lee and Ham and Eggs in old letters and records of the Underground Railroad. The character of Hetty Scott is based on a description I found in John Parker's autobiography. The heart-wrenching tale of Ordee Lee saving the locks of hair from his family comes from a slave's actual account. However, I adapted all of this material to fit into the story of Samuel and Harrisonso time periods and locations have often been changed. One of the most memorable aspects of writing this book was taking a trip to northern Kentucky and southern Ohio in late summer. To be able to describe the Cornfield Bottoms and the Ohio River, I walked down to the river late at night to see what it looked like and how it sounded in the darkness. To be able to write about Samuel's mother, I stood on a street corner in Old Washington, Kentucky, where slaves were once auctioned. I even stayed in houses that had been in existence during the years of the Underground Railroad. I chose the southern Ohio and northern Kentucky region for my setting since it had been a very active area for the Underground Railroad. I selected the year 1859 because Congress passed a national law called the Fugitive Slave Act in 1850, which affected everyone involved in the Underground Railroad. Severe penalties such as heavy fines and jail time awaited anyonewhite or blackwho helped or harbored runaway slaves anywhere in the United States after 1850. The law also required people to return runaway slaves to their owners, even if the runaways were living in free states like Ohio. African-Americans like August and Belle, who had papers to prove their freedom, were safe from capture even though their lives were sometimes restricted by local and state "black laws." However, runaway slaves were only safe if they left the country and went to places like Canada or Mexico. That is why Samuel and Harrison had to journey all the way to Canada to be free in 1859. So, if you visited Canada today, would you still find a peaceful place called Harrison's Pond? And is there a tumbledown farmhouse somewhere in Kentucky with an old burying-ground for slaves nearby? Harrison's Pond and Blue Ash, Kentucky, are places in my imagination, but there are many other places to visit with solemn footsteps and remember. I hope that you will. Shelley Pearsall
Kundenbewertungen
Schreiben Sie eine Kundenbewertung zu diesem Produkt und gewinnen Sie mit etwas Glück einen 15,- EUR bücher.de–Gutschein!
Bewertung schreiben Bewertung schreiben
Bewertung schreiben Bewertung schreiben