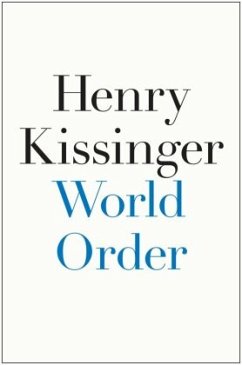 Dazzling and instructive . . . [a] magisterial new book. Walter Isaacson, Time
Henry Kissinger offers in World Order a deep meditation on the roots of international harmony and global disorder. Drawing on his experience as one of the foremost statesmen of the modern era advising presidents, traveling the world, observing and shaping the central foreign policy events of recent decades Kissinger now reveals his analysis of the ultimate challenge for the twenty-first century: how to build a shared international order in a world of divergent historical perspectives, violent conflict,…mehr

Henry Kissinger offers in World Order a deep meditation on the roots of international harmony and global disorder. Drawing on his experience as one of the foremost statesmen of the modern era advising presidents, traveling the world, observing and shaping the central foreign policy events of recent decades Kissinger now reveals his analysis of the ultimate challenge for the twenty-first century: how to build a shared international order in a world of divergent historical perspectives, violent conflict, proliferating technology, and ideological extremism.

There has never been a true world order, Kissinger observes. For most of history, civilizations defined their own concepts of order. Each considered itself the center of the world and envisioned its distinct principles as universally relevant. China conceived of a global cultural hierarchy with the emperor at its pinnacle. In Europe, Rome imagined itself surrounded by barbarians; when Rome fragmented, European peoples refined a concept of an equilibrium of sovereign states and sought to export it across the world. Islam, in its early centuries, considered itself the world s sole legitimate political unit, destined to expand indefinitely until the world was brought into harmony by religious principles. The United States was born of a conviction about the universal applicability of democracy a conviction that has guided its policies ever since.

Now international affairs take place on a global basis, and these historical concepts of world order are meeting. Every region participates in questions of high policy in every other, often instantaneously. Yet there is no consensus among the major actors about the rules and limits guiding this process or its ultimate destination. The result is mounting tension.

Grounded in Kissinger s deep study of history and his experience as national security advisor and secretary of state, World Order guides readers through crucial episodes in recent world history. Kissinger offers a unique glimpse into the inner deliberations of the Nixon administration s negotiations with Hanoi over the end of the Vietnam War, as well as Ronald Reagan s tense debates with Soviet Premier Gorbachev in Reykjavík. He offers compelling insights into the future of U.S. China relations and the evolution of the European Union, and he examines lessons of the conflicts in Iraq and Afghanistan. Taking readers from his analysis of nuclear negotiations with Iran through the West s response to the Arab Spring and tensions with Russia over Ukraine, World Order anchors Kissinger s historical analysis in the decisive events of our time.

Provocative and articulate, blending historical insight with geopolitical prognostication, World Order is a unique work that could come only from a lifelong policy maker and diplomat. Kissinger is also the author of On China.
Produktdetails
Autorenporträt
HENRY KISSINGER served as National Security Advisor and then Secretary of State under Richard Nixon and Gerald Ford and has advised many other American presidents on foreign policy. He received the 1973 Nobel Peace Prize, the Presidential Medal of Freedom, and the Medal of Liberty, among other awards. He is the author of numerous books on foreign policy and diplomacy and is currently the chairman of Kissinger Associates, Inc., an international consulting firm.
Rezensionen

It is vintage Kissinger, with his singular combination of breadth and acuity along with his knack for connecting headlines to trend lines very long trend lines in this case. He ranges from the Peace of Westphalia to the pace of microprocessing, from Sun Tzu to Talleyrand to Twitter . . . A real national dialogue is the only way we re going to rebuild a political consensus to take on the perils and the promise of the 21st century. Henry Kissinger s book makes a compelling case for why we have to do it and how we can succeed. Hillary Clinton, The Washington Post

"Henry Kissinger s new book, World Order, could not be more timely . . . the book puts the problems of today s world and America s role in that increasingly interconnected and increasingly riven world into useful and often illuminating context . . . Mr. Kissinger, now 91, strides briskly from century to century, continent to continent, examining the alliances and divisions that have defined Europe over the centuries, the fallout from the disintegration of nation-states like Syria and Iraq, and China s developing relationship with the rest of Asia and the West. At its best, his writing functions like a powerful zoom lens, opening out to give us a panoramic appreciation of larger historical trends and patterns, then zeroing in on small details and anecdotes that vividly illustrate his theories." Michiko Kakutani, The New York Times

Kissinger s conclusion deserves to be read and understood by all candidates ahead of the 2016 presidential election. World order depends on it. The Financial Times

If you think America is doing just fine, then skip ahead to the poetry reviews. If, however, you worry about a globe spinning out of control, then World Order is for you. It brings together history, geography, modern politics and no small amount of passion. Yes, passion, for this is a cri de Coeur, from a famous skeptic, a warning to future generations from an old man steeped in the past . . . it is a book that every member of Congress should be locked in a room with and forced to read before taking the oath of office." John Micklethwait, The New York Times Book Review

"Recent years have not been kind to those who believe in America's missionary role abroad. Since the terrorist attacks of 2001 upended our sense of the world, the United States has been governed by a conservative idealist who tried to impose American values on the Middle East, and failed calamitously, and a liberal idealist who invited America's adversaries to re-engage with us on the basis of a new humility and mutual respect, and found his hopes dashed. It is, in short, a moment for Henry Kissinger . . . The fact that he has written yet another book, the succinctly titled World Order, is impressive in itself. What is more remarkable is that it effectively carries on his campaign to undermine the romantic pieties of left and right that have shaped so much of American foreign policy over the past century. Mr. Kissinger bids fair to outlast many of the people who hate him and make others forget why they hated him in the first place." James Traub, The Wall Street Journal

Kissinger s book takes us on a dazzling and instructive global tour of the quest for order. . . . The key to Kissinger s foreign policy realism, and the theme at the heart of his magisterial new book, is that such humility is important not just for people but also for nations, even the U.S. Making progress toward a world order based on 'individual dignity and participatory governance' is a lofty ideal, he notes. 'But progress toward it will need to be sustained through a series of intermediate stages.' Walter Isaacson, Time

"Kissinger's geopolitical analysis of our global challenges is compelling . . . Mark Twain, who was known more for his sense of humor than his diplomatic skills, once said, 'History does not repeat itself. But it rhymes.' Kissinger's advice is not nearly as glib, but much more valuable to a country that right now seems to want the rest of the world to just go away." The Los Angeles Times

"Kissinger . . . demonstrates why he remains such a courted adviser to American presidents and foreign leaders alike. . . . [World Order is] a guide for the perplexed, a manifesto for reordering America s approach to the rest of the globe. Kissinger s vision could help to shape a more tranquil era than the one that has emerged so far. Jacob Heilbrunn, The National Interest