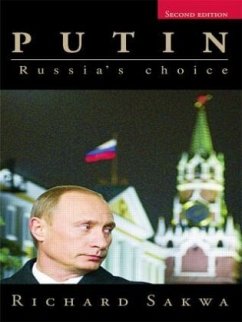 The new edition of this extremely well-received political biography of Vladimir Putin builds on the strengths of the first edition to provide the most detailed and nuanced account of the man, his politics and his profound influence on Russian politics, foreign policy and society. New to this edition: analysis of Putin's second term as President more biographical information in the light of recent research detailed discussion of changes to the policy process and the élites around Putin developments in state-society relations including the conflicts with oligarchs such as Khodorkovsky review of…mehr

Andere Kunden interessierten sich auch für
Produktbeschreibung
The new edition of this extremely well-received political biography of Vladimir Putin builds on the strengths of the first edition to provide the most detailed and nuanced account of the man, his politics and his profound influence on Russian politics, foreign policy and society. New to this edition: analysis of Putin's second term as President more biographical information in the light of recent research detailed discussion of changes to the policy process and the élites around Putin developments in state-society relations including the conflicts with oligarchs such as Khodorkovsky review of changes affecting the party system and electoral legislation, including the development of federalism in Russia details on economic performance under Putin, including more discussion of the energy sector and pipeline politics Russia's relationship with NATO after the 'big bang' enlargement, EU-Russian relations after enlargement, and Russia's relations with other post-Soviet states the conclusion brings us up-to-date with debates over the question of democracy in Russia today and the nature of Putin's leadership and his place in the world. Putin is essential reading for all scholars and students of Russian politics.
Produktdetails
Inhaltsangabe
Part 1: The Path to Power 1. The unlikely making of a leader 2. The succession operation Part 2: Russia at the Turn of the Millenium 1. Who is Mr Putin? 2. The nature of the system 3. The ideas behind the choice 4. Planning for the future 5. The state of the nation 6. The politics of 'nornalisation' Part 3: The Putin Way 1. Building the Putin bloc 2. Putin and the people 3. Leadership style 4. Putin's path: towards a Russian 'third way'? Part 4: State and Society 1. State and regime 2. State strengthening as politics or law 3. The 'liquidation of the oligarchs as a class' 4. Freedom of speech and the media 5. Judicial reform and human rights Part 5: Restructuring the Political Space 1. Changes to the party system 2. Changes to electoral legislation 3. Parliamentary realignment 4. Regime and opposition 5. Democracy and civil society Part 6: Putin and the Regions 1. Segmented regionalism 2. Segmented regionalism and state reconstitution 3. Establishing the presidential 'vertical' 4. Reorganising federal relations 5. Regional governors and legislatures 6. State reconstitution and federalism Part 7: Reforging the Nation 1. Images of the nation and symbols of the state 2. Social aspects of national identity 3. Chechnya: tombstone or crucible of Russian power? Part 8: Russian Capitalism 1. Entering the market 2. Models of capitalism: oligarchical democracy? 3. State economy and society Part 9: Putin and the World 1. The normalisation of foreign policy 2. Putin's choice 3. Practising normality Part 10: Conclusion 1. Out of the wilderness? 2. Putin and the power of contradiction
Rezensionen
'Richard Sakwa's Putin: Russia's Choice is the best book in English on Putin's presidency by one of the world's leading authorities on contemporary Russian politics. Sakwa's analysis of Putin is sympathetic but he is not blind to the many problems and failures that have marred Russia's progress away from the chaos of the Yeltsin era. Sakwa cuts through the hype of the pro- and anti-Putin camps to weigh up both the degradation of democracy under Putin and the possibilities for democratic evolution. Importantly, as the end of Putin's second presidential term nears, Sakwa allows us a glimpse of how Russia might develop beyond Putin and, perhaps, without him.' - Neil Robinson, University of Limerick, Ireland 'Richard Sakwa's latest book is the best short text in print on Russian politics in the Putin era. It presents Putin as a Jacobin state builder and on the whole as an effective reformer, but does not spare criticism or analysis of Putin's and Russia's many contradictions. I cannot think of a better starting point for understanding Russian and Eurasian politics in the second post-communist decade.' - Timothy Colton, Harvard University, USA 'In this second edition of his classic analysis of Putin's Russia, Richard Sakwa again challenges those who are too quick and willing to condemn the Soviet president as anti-democratic and a traditional autocratic Russian leader. Sakwa writes in his usual deceptive style - his prose is clear and might initially appear straightforward, but in fact conveys highly sophisticated and complex arguments. This book will not appeal to simplistic souls who want to see the world in black-and-white, 'good guys and bad guys' terms. Rather, it will attract those who can handle complexity and contradictions - the reality of politics, whether in Russia or anywhere else. And it will appeal to those who want a deeper understanding of the leader of one of the world's most significant states, one that is becoming increasingly influential again in world affairs.' - Leslie Holmes, University of Melbourne, Australia 'The main accomplishment of this book is that it sheds much light on the rationale behind Putin's policies, in part by deviating from more conventional explanations that assume the authoritarian nature of political development in Russia. Besides, the book is a rich source of factual information about the Putin years-so far. Since the Putin era appears to be far from over, even when a formal shift of power has occurred, this will remain an important textbook for many years to come.' - Max Bader, Europe-Asia Studies…mehr
Kundenbewertungen
Schreiben Sie eine Kundenbewertung zu diesem Produkt und gewinnen Sie mit etwas Glück einen 15,- EUR bücher.de–Gutschein!
Bewertung schreiben Bewertung schreiben
Ein Marktplatz-Angebot für "Putin" für 14,99 €
Mehr zum Thema
Mehr aus der Kategorie Engl. Books > Biografien & Erinnerungen