Seneca at the Court of Nero 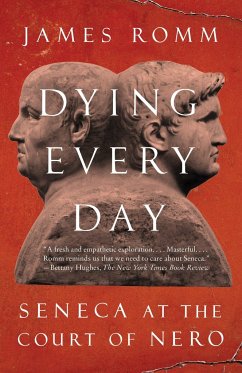 Seneca at the Court of Nero

From acclaimed classical historian, author of Ghost on the Throne a high-stakes drama full of murder, madness, tyranny, perversion, with the sweep of history on the grand scale.
At the center, the tumultuous life of Seneca, ancient Rome s preeminent writer and philosopher, beginning with banishment in his fifties and subsequent appointment as tutor to twelve-year-old Nero, future emperor of Rome. Controlling them both, Nero s mother, Julia Agrippina the Younger, Roman empress, great-granddaughter of the Emperor Augustus, sister of the Emperor Caligula, niece and fourth wife of Emperor…mehr

Andere Kunden interessierten sich auch für
Produktbeschreibung
From acclaimed classical historian, author of Ghost on the Throne a high-stakes drama full of murder, madness, tyranny, perversion, with the sweep of history on the grand scale.

At the center, the tumultuous life of Seneca, ancient Rome s preeminent writer and philosopher, beginning with banishment in his fifties and subsequent appointment as tutor to twelve-year-old Nero, future emperor of Rome. Controlling them both, Nero s mother, Julia Agrippina the Younger, Roman empress, great-granddaughter of the Emperor Augustus, sister of the Emperor Caligula, niece and fourth wife of Emperor Claudius.

James Romm seamlessly weaves together the life and written words, the moral struggles, political intrigue, and bloody vengeance that enmeshed Seneca the Younger in the twisted imperial family and the perverse, paranoid regime of Emperor Nero, despot and madman.

Romm writes that Seneca watched over Nero as teacher, moral guide, and surrogate father, and, at seventeen, when Nero abruptly ascended to become emperor of Rome, Seneca, a man never avid for political power became, with Nero, the ruler of the Roman Empire. We see how Seneca was able to control his young student, how, under Seneca s influence, Nero ruled with intelligence and moderation, banned capital punishment, reduced taxes, gave slaves the right to file complaints against their owners, pardoned prisoners arrested for sedition. But with time, as Nero grew vain and disillusioned, Seneca was unable to hold sway over the emperor, and between Nero s mother, Agrippina thought to have poisoned her second husband, and her third, who was her uncle (Claudius), and rumored to have entered into an incestuous relationship with her son and Nero s father, described by Suetonius as a murderer and cheat charged with treason, adultery, and incest, how long could the young Nero have been contained?

Dying Every Day is a portrait of Seneca s moral struggle in the midst of madness and excess. In his treatises, Seneca preached a rigorous ethical creed, exalting heroes who defied danger to do what was right or embrace a noble death. As Nero s adviser, Seneca was presented with a more complex set of choices, as the only man capable of summoning the better aspect of Nero s nature, yet, remaining at Nero s side and colluding in the evil regime he created.

Dying Every Day is the first book to tell the compelling and nightmarish story of the philosopher-poet who was almost a king, tied to a tyrant as Seneca, the paragon of reason, watched his student spiral into madness and whose descent saw five family murders, the Fire of Rome, and a savage purge that destroyed the supreme minds of the Senate s golden age.
Produktdetails
Autorenporträt
James Romm is the James H. Ottaway Jr. Professor of Classics at Bard College. He has received fellowships from the Guggenheim Foundation, the National Endowment for the Humanities, and the Dorothy and Lewis B. Cullman Center for Scholars and Writers. His books on the ancient world include Ghost on the Throne, The Edges of the Earth in Ancient Thought, Herodotus and, as editor, The Landmark Arrian: The Campaigns of Alexander.
Rezensionen
Praise for James Romm s DYING EVERY DAY

James Romm stitches this tapestry of evil together with a practiced hand. Buffalo News

A splendid and incisive historical page-turner. . . . This is how history should be written: vivid storytelling springing to life at a master s touch. . . . Romm s narrative proves so compelling precisely because he concentrates on character, combining erudite scholarship with a novelist s flair for telling detail. The result becomes an exception to the rule: When exercised with wisdom, dexterity and fervor, literary power shines as incorruptible. Wichita Eagle

Thoroughly engaging and fascinating. . . . A high-stakes drama, laced with murders, madness, and despotism. . . . The highlight of the spring season. Hudson Valley News

Romm s approach combines the commonly known with the fascinating, but more obscure. He makes a sustained point of showing Seneca as neither black nor white, neither totally deserving of his fate, nor so noble that all charges should drip off his well-oiled back. He shows different sides to the emperors as well and puts the women of the Caesars into their well-deserved positions of prominence. . . . The fact that Romm presents the Stoic philosopher in this novel complex light and that he shows sides of the more famous that aren't common knowledge leaves me feeling [like] I got an awful lot out of reading it. Have I mentioned, I really, really liked this book? N. S. Gill, About.com

Historians from Seneca s contemporaries through the present day have puzzled over his true character. Ascetic Stoic moralist or conniving courtier? Romm doesn't claim to settle the centuries-old mystery, but sheds light using ancient sources and occasional references to modern critics, joining his readers in marveling at a regime remembered by history for its shocking excesses. Julia Jenkins, Shelf Awareness (Starred Review)

Extensively researched. A book that will be welcomed by both scholars and those with a more casual interest in history. In addition and most important to our time is the detailed study of power politics and the inevitable consequences of weakness and corruption allowing power to be concentrated into few hands An engrossing account of a time when rational thought was set aside in favor of passion and when good men cowed in the face of tyranny and did nothing to stem it. New York Journal of Books