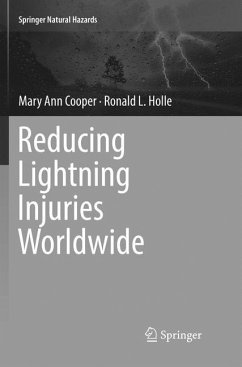 This book is a resource for understanding why Lightning continues to be a major health hazard, especially in the developing world, and equips researchers, governments, and public health advocates with the knowledge and techniques needed to reduce lightning casualties worldwide.

Andere Kunden interessierten sich auch für
Produktbeschreibung
This book is a resource for understanding why Lightning continues to be a major health hazard, especially in the developing world, and equips researchers, governments, and public health advocates with the knowledge and techniques needed to reduce lightning casualties worldwide.

Produktdetails
Autorenporträt
Dr. Mary Ann Cooper is an emergency physician whose main area of interest is electrical and lightning injuries.  She received her BS and MD from Michigan State University (1971, 1975) and trained in Emergency Medicine (EM) at the University of Cincinnati.  As an early pioneer in emergency medicine, she helped design training and accreditation standards in the field as well as serving on the governing boards of several national EM organizations and as an Oral Board Examiner for more than a decade.  She has become known as the international expert on lightning injuries and has received numerous awards from both the medical and lightning communities for her work.  In 2003, she became the first physician to be awarded a fellowship from the American Meteorological Society and has been awarded the International Conference on Lightning Protection Scientific Committee's Award for 'outstanding contribution to lightning science by research or teaching' in 2014.  She is the author of 6 books and monographs, 61 peer reviewed publications, 2 letters to the editor, 3 editorials, 101 chapters and many informal papers.  She has served as a trainer for the National Weather Service, given hundreds of media interviews worldwide on lightning and lightning injury prevention, and served as an invited expert for several international lightning protection conferences.  After retiring from the University of Illinois, Dr Cooper was awarded Professor Emerita and continues working internationally to mentor young lightning scientists, prevent lightning injuries, educate and raise awareness of lightning safety.  She has served as a Board Member of the Lightning and Electrical Shock Survivors, International, support group for over 25 years and currently serves as the Founding Director of the African Centres for Lightning and Electromagnetics.   Ron Holle is a meteorological consultant in Oro Valley, Arizona. Ron has worked extensively in meteorological education issues, particularly those relating to lightning safety and the demographics of lightning victims and damages and is recognized as the world expert on the demographics of lightning injury.  He received his B.S. and M.S. degrees in meteorology from Florida State University and took additional coursework at the University of Miami.  He has authored or co-authored 64 formally-reviewed journal papers, 12 books and book chapters, and 310 informal papers. He worked with NOAA research laboratories in Norman, Oklahoma, Boulder, Colorado, Coral Gables, Florida, and Silver Spring, Maryland as well as more recently with Vaisala in Tucson. He has analysed cloud-to-ground and cloud lightning data from ground-based detection networks as they relate to various meteorological phenomena. He participated in meteorological field programs in Florida, the Caribbean, and West Africa. Mr. Holle served on the scientific organizing committees of the International Lightning Detection Conferences and International Lightning Meteorology Conferences from 2002 through 2014. He was elected a Fellow of the American Meteorological Society in 2009 and received the Dr. T. Theodore Fujita Research Achievement Award from the National Weather Association in 2008.
Inhaltsangabe
Foreword.- Preface.- Acknowledgments.- List of Abbreviations and Definitions.- Part I: How Lightning Kills, Injures, and Causes Damage.- Introduction.- Mechanisms of Lightning Injury.- Lightning Effects on the Body.- Research on Pathophysiology of Medical Effects by Lightning.- Economic Damages of Lightning.- Part II: Estimates of People Killed and Injured by Lightning.- Current Global Estimates of Lightning Fatalities and Injuries.- Lightning Fatalities since 1800.- Locations and Activities of Lightning Casualties.- Gender, Age, and Casualties per Incident.- Contributors to Lightning Casualty Risk.- Part III: When and Where Lightning Occurs.- Global Lightning Distribution.- Time of Year and Time of Day of Lightning.- Meteorological Concepts Affecting Lightning Formation.- Lightning Detection.- Part IV: How to Reduce Lightning Global Casualties.- How to Make Baseline Studies on Lightning Deaths and Damages.- Identification of Safe and Unsafe Areas.- Lightning Protection.- History
Kundenbewertungen
Schreiben Sie eine Kundenbewertung zu diesem Produkt und gewinnen Sie mit etwas Glück einen 15,- EUR bücher.de–Gutschein!
Bewertung schreiben Bewertung schreiben
Mehr zum Thema