The Singularity Is Near: When Humans Transcend Biology 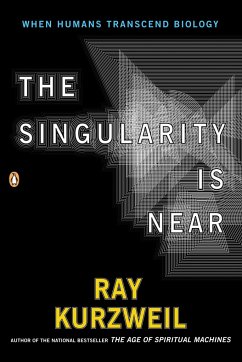 The Singularity Is Near: When Humans Transcend Biology

In his latest, thrilling foray into the future, a great inventor and futurist envisions an event--the "singularity"--in which technological change becomes so rapid and so profound that human bodies and brains will merge with machines.
Startling in scope and bravado. Janet Maslin, The New York Times
Artfully envisions a breathtakingly better world. Los Angeles Times
Elaborate, smart and persuasive. The Boston Globe
A pleasure to read. The Wall Street Journal
One of CBS News s Best Fall Books of 2005 Among St Louis Post-Dispatch s Best Nonfiction Books of 2005 One of…mehr

Andere Kunden interessierten sich auch für
Produktbeschreibung
In his latest, thrilling foray into the future, a great inventor and futurist envisions an event--the "singularity"--in which technological change becomes so rapid and so profound that human bodies and brains will merge with machines.Startling in scope and bravado. Janet Maslin, The New York Times

A pleasure to read. The Wall Street Journal

For over three decades, Ray Kurzweil has been one of the most respected and provocative advocates of the role of technology in our future. In his classic The Age of Spiritual Machines, he argued that computers would soon rival the full range of human intelligence at its best. Now he examines the next step in this inexorable evolutionary process: the union of human and machine, in which the knowledge and skills embedded in our brains will be combined with the vastly greater capacity, speed, and knowledge-sharing ability of our creations.


Produktdetails
Autorenporträt
Ray Kurzweil is one of the world's leading inventors, thinkers, and futurists, with a twenty-year track record of accurate predictions. Called "the restless genius" by The Wall Street Journal and "the ultimate thinking machine" by Forbes magazine, Kurzweil was selected as one of the top entrepreneurs by Inc. magazine, which described him as the "rightful heir to Thomas Edison." PBS selected him as one of "sixteen revolutionaries who made America," along with other inventors of the past two centuries. An inductee into the National Inventors Hall of Fame and recipient of the National Medal of Technology, the Lemelson-MIT Prize (the world's largest award for innovation), thirteen honorary doctorates, and awards from three U.S. presidents, he is the author of five other books: Fantastic Voyage: Live Long Enough to Live Forever (coauthored with Terry Grossman, M.D.), The Age of Spiritual Machines, The 10% Solution for a Healthy Life, and The Age of Intelligent Machines, and How to Create a Mind.

Visit Ray Kurzweil on the web:

http://www.kurzweilai.net
Rezensionen
Anyone can grasp Mr. Kurzweil s main idea: that mankind s technological knowledge has been snowballing, with dizzying prospects for the future. The basics are clearly expressed. But for those more knowledgeable and inquisitive, the author argues his case in fascinating detail . . . . The Singularity Is Near is startling in scope and bravado.
Janet Maslin, The New York Times

Filled with imaginative, scientifically grounded speculation . . . . The Singularity Is Near is worth reading just for its wealth of information, all lucidly presented . . . . [It s] an important book. Not everything that Kurzweil predicts may come to pass, but a lot of it will, and even if you don t agree with everything he says, it s all worth paying attention to.
The Philadelphia Inquirer

[An] exhilarating and terrifyingly deep look at where we are headed as a species . . . . Mr. Kurzweil is a brilliant scientist and futurist, and he makes a compelling and, indeed, a very moving case for his view of the future.
The New York Sun

Kurzweil links a projected ascendance of artificial intelligence to the future of the evolutionary process itself. The result is both frightening and enlightening . . . . The Singularity Is Near is a kind of encyclopedic map of what Bill Gates once called the road ahead.
The Oregonian

A clear-eyed, sharply-focused vision of the not-so-distant future.
The Baltimore Sun

This book offers three things that will make it a seminal document. 1) It brokers a new idea, not widely known, 2) The idea is about as big as you can get: the Singularity all the change in the last million years will be superceded by the change in the next five minutes, and 3) It is an idea that demands informed response. The book s claims are so footnoted, documented, graphed, argued, and plausible in small detail, that it requires the equal in response. Yet its claims are so outrageous that if true, it would mean . . . well . . . the end of the world as we know it, and the beginning of utopia. Ray Kurzweil has taken all the strands of the Singularity meme circulating in the last decades and has united them into a single tome which he has nailed on our front door. I suspect this will be one of the most cited books of the decade. Like Paul Ehrlich s upsetting 1972 book Population Bomb, fan or foe, it s the wave at epicenter you have to start with.
Kevin Kelly, founder of Wired

Really, really out there. Delightfully so.
Businessweek.com

Stunning, utopian vision of the near future when machine intelligence outpaces the biological brain and what things may look like when that happens . . . . Approachable and engaging.
the unofficial Microsoft blog

One of the most important thinkers of our time, Kurzweil has followed up his earlier works . . . with a work of startling breadth and audacious scope.
newmediamusings.com

An attractive picture of a plausible future.
Kirkus Reviews

Kurzweil is a true scientist a large-minded one at that . . . . What s arresting isn t the degree to which Kurzweil s heady and bracing vision fails to convince given the scope of his projections, that s inevitable but the degree to which it seems downright plausible.
Publishers Weekly (starred review)

[T]hroughout this tour de force of boundless technological optimism, one is impressed by the author s adamantine intellectual integrity . . . . If you are at all interested in the evolution of technology in this century and its consequences for the humans who are creating it, this is certainly a book you should read.
John Walker, inventor of Autodesk, in Fourmilab Change Log

Ray Kurzweil is the best person I know at predicting the future of artificial intelligence. His intriguing new book envisions a future in which information technologies have advanced so far and fast that they enable humanity to transcend its biological limitations transforming our lives in ways we can t yet imagine.
Bill Gates

If you have ever wondered about the nature and impact of the next profound discontinuities that will fundamentally change the way we live, work, and perceive our world, read this book. Kurzweil s Singularity is a tour de force, imagining the unimaginable and eloquently exploring the coming disruptive events that will alter our fundamental perspectives as significantly as did electricity and the computer.
Dean Kamen, recipient of the National Medal of Technology, physicist, and inventor of the first wearable insulin pump, the HomeChoice portable dialysis machine, the IBOT Mobility System, and the Segway Human Transporter

One of our leading AI practitioners, Ray Kurzweil, has once again created a must read book for anyone interested in the future of science, the social impact of technology, and indeed the future of our species. His thought-provoking book envisages a future in which we transcend our biological limitations, while making a compelling case that a human civilization with superhuman capabilities is closer at hand than most people realize.
Raj Reddy, founding director of the Robotics Institute at Carnegie Mellon University and recipient of the Turing Award from the Association for Computing Machinery