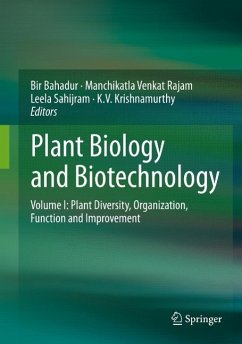 This volume offers a much-needed compilation of essential reviews on diverse aspects of plant biology, written by eminent botanists. These reviews effectively cover a wide range of aspects of plant biology that have contemporary relevance. At the same time they integrate classical morphology with molecular biology, physiology with pattern formation, growth with genomics, development with morphogenesis, and classical crop-improvement techniques with modern breeding methodologies. Classical botany has been transformed into cutting-edge plant biology, thus providing the theoretical basis for…mehr

It goes without saying that biotechnology has emerged as a powerful discipline of Biology in the last three decades. Biotechnological tools, techniques and information, used in combination with appropriate planning and execution, have already contributed significantly to economic growth and development. It is estimated that in the next decade or two, products and processes made possible by biotechnology will account for over 60% of worldwide commerce and output. There is, therefore, a need to arrive at a general understanding and common approach to issues related to the nature, possession, conservation and use of biodiversity, as it provides the raw material for biotechnology. More than 90% of the total requirements for the biotechnology industry are contributed by plants and microbes, in terms of goods and services. There are however substantial plant and microbial resources that are waiting for biotechnological exploitation in the near future through effective bioprospection. In order to exploit plants and microbes for their useful products and processes, we need to first understand their basic structure, organization, growth and development, cellular process and overall biology. We also need to identify and develop strategies to improve the productivity of plants.

In view of the above, in this two-volume book on plant biology and biotechnology, the first volume is devoted to various aspects of plant biology and crop improvement. It includes 33 chapters contributed by 50 researchers, each of which is an expert in his/her own field of research. The book begins with an introductory chapter that gives a lucid account on the past, present and future of plant biology, thereby providing a perfect historical foundation for the chapters that follow. Four chapters are devoted to details on the structural and developmental aspects of the structures of plants and their principal organs. These chapters provide the molecular biological basis for the regulation of morphogenesis of the form of plants and their organs, involving control at the cellular and tissue levels. Details on biodiversity, the basic raw material for biotechnology, are discussed in a separate chapter, in which emphasis is placed on the genetic, species and ecosystem diversities and their conservation.

Since fungi and other microbes form an important component of the overall biodiversity, special attention is paid to the treatment of fungi and other microbes in this volume. Four chapters respectively deal with an overview of fungi, arbuscularmycorrhizae and their relation to the sustenance of plant wealth, diversity and practical applications of mushrooms, and lichens (associated with a photobiont). Microbial endosymbionts associated with plants and phosphate solubilizing microbes in the rhizosphere of plants are exhaustively treated in two separate chapters. The reproductive strategies of bryophytes and an overview on Cycads form the subject matter of another two chapters, thus fulfilling the need to deal with the non-flowering Embryophyte group of plants.

Angiosperms, the most important group of plants from a biotechnological perspective, are examined exhaustively in this volume. The chapters on angiosperms provide an overview and cover the genetic basis of flowers development, pre-and post-fertilization reproductive growth and development, seed biology and technology, plant secondary metabolism, photosynthesis, and plant volatile chemicals. A special effort has been made to include important topics on crop improvement in this volume. The importance of pollination services, apomixes, male sterility, induced mutations, polyploidy and climate changes is discussed, each in a separate chapter.

Microalgalnutra-pharmaceuticals, vegetable-oil-based nutraceuticals and the importance of alien crop resources and underutilized crops for food and nutritional security form the topics of three other chapters in this volume. There is also a special chapter on the applications of remote sensing in the plant sciences, which also provides information on biodiversity distribution.

The editors of this volume believe the wide range of basic topics on plant biology that have great relevance in biotechnology covered will be of great interest to students, researchers and teachers of botany and plant biotechnology alike.

Rezensionen
"Plant Biology and Biotechnology will be the go-to resource for complete and accurate information on almost any plant-related question. ... The chapter titles provide clear and accurate descriptions of their contents. ... I bet that by just reading the chapter titles, you have already begun to think more deeply and broadly about the value of plants in the world. ... It will be good for the soul of the individual and the soul of plant biology and biotechnology." (Randy Wayne, The Quarterly Review of Biology, Vol. 91 (2), June, 2016)
Kundenbewertungen
Schreiben Sie eine Kundenbewertung zu diesem Produkt und gewinnen Sie mit etwas Glück einen 15,- EUR bücher.de–Gutschein!
Bewertung schreiben Bewertung schreiben
Mehr zum Thema