Enabling seamless connectivity while saving on hardware and energy 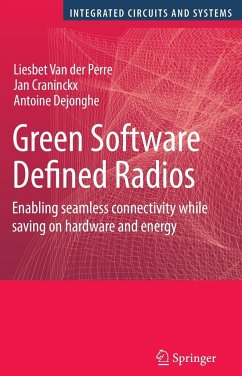 Enabling seamless connectivity while saving on hardware and energy

Green software defined radios will be crucial to maintaining and improving future wireless services. This book offers insight into the trends, challenges, and future evolution of (flexible) radios, and elaborates on the essential ingredients of these radios.
Green Software De?ned Radios, the title of this book may have originated from a lackofinspiration,andthecombinationofhardwork,jetlag,anddrinkinggreentea. The message we want to convey however, is that SDRs are a promising technology for the future, providing they are designed for ef?cient usage of scarce resources: energy and spectrum.…mehr

Andere Kunden interessierten sich auch für
Produktbeschreibung
Green software defined radios will be crucial to maintaining and improving future wireless services. This book offers insight into the trends, challenges, and future evolution of (flexible) radios, and elaborates on the essential ingredients of these radios.Green Software De?ned Radios, the title of this book may have originated from a lackofinspiration,andthecombinationofhardwork,jetlag,anddrinkinggreentea. The message we want to convey however, is that SDRs are a promising technology for the future, providing they are designed for ef?cient usage of scarce resources: energy and spectrum. In the last years, the R&D teams focusing on wireless c- munication (around the world and at IMEC speci?cally), have realized great bre- throughs. It is our honor, building on this knowledge, to bring a comprehensive overview of the essential technologies. We are grateful that Springer is willing to publish in their collection on radio technologies, a book on green SDRs, a weird species still today, yet maybe the baseline for the day after tomorrow. Dear reader, we wish that you ?nd in the following pages, including the references, some int- esting insights, and that this book may live more or less up to your expectations (and hopefully more than less). Thisbook'sclosingstatesthatthequestforGreenSDRshasnotended,thisisjust the beginning. Concerning this book however, we are happy that today the opposite is true. We want to acknowledge our colleagues at IMEC for their great scienti?c contribution, and even more for the enjoyable cooperation.
Produktdetails
Autorenporträt
Liesbet Van der Perre: received the M. Sc. Degree in Electrical Engineering from the K.U.Leuven, Belgium, in 1992. The research for her thesis was completed at the Ecole Nationale Supérieure de Telecommunications in Paris. She graduated summa cum laude with a PhD in electrical engineering form the same university in 1997. Liesbet earned an award from IBM in 1986, and she received a study-visit scholarship for study in the United States from the Fina Maecenas Foundation. Her work in the past focused on radio propagation modeling, system design and digital modems for high-speed wireless communications. She was a system architect in IMEC's OFDM ASICs development, which was nominated as one of the IEEE International Solid State Circuit Conference's (ISSCC's) 'Best of 50 Years' papers. Consequently, she was the project leader for IMEC's low power Turbo codec. Currently, she is the scientific director of wireless research group in IMEC's, comprising teams of researchers in the fields of digital baseband solutions, RF front-ends, cross-layer optimization, mixed-signal design technologies, and ultra low power radios. She's the project leader for the digital baseband Software Defined Radio, and a public speaking coach for IMEC staff. Also, she was a part-time professor at the University of Antwerp, Belgium, till 2004. She's an author and co-author of over 150 scientific publications published in conference proceedings, journals, and books. Jan Craninckx: obtained his Ms. and Ph.D. degree in microelectronics summa cum laude from the ESAT-MICAS laboratories of the Katholieke Universiteit Leuven in 1992 and 1997, respectively. His Ph.D. work was on the design of low-phase noise CMOS integrated VCOs and synthesizers, where he was a pioneer in RFCMOS design. From 1997 till 2002 he worked with Alcatel Microelectronics (now part of STMicroelectronics) as a senior RF engineer on the integration of RF transceivers for GSM, DECT, Bluetooth and WLAN. Since 2002 he is a principal scientist in the wireless research group in IMEC (Leuven, Belgium) where his research interests are in the design of RF transceivers for software defined radio (SDR) systems. Dr. Craninckx has authored and co-authored more than 60 papers, several book chapters and has published one book in the field of analog and RF IC design. He is the inventor of 10 patents, and is a member of the Technical Program Committee for both the ISSCC and ESSCIRC conferences. Antoine Dejonghe: received the M. Sc. Degree in Electrical Engineering (summa cum laude) and the Ph.D. degree from the Université Catholique de Louvain (UCL), Louvain-la-Neuve, Belgium, in 2000 and 2004, respectively. He was with the Communications and Remote Sensing Laboratory of UCL from 2000 to 2004, as a Research Fellow of the Belgian National Fund for Scientific Research (FNRS). Since 2004, he is Senior Researcher in the Wireless Research Group of the Inter-university Microelectronics Center (IMEC), Leuven, Belgium. His work in the past focused on digital communication system design, with a special emphasis on iterative detection and decoding schemes relying on the so-called turbo principle. He is currently carrying and coordinating research activities in the field of cross-layer optimization for energy-aware multimedia wireless communications, building on SDR-based baseband engines and reconfigurable analog front-ends. He is also looking at the extension of these concepts to cognitive radio systems. Antoine Dejonghe is an author and co-author of over 35 scientific publications.
Inhaltsangabe
1. The Wireless and Technology Scene: Trends asking for Green Software Defined Radio Solutions. 2. Software Defined Radios: Enabling seamless connectivity for handheld devices. 3. Software Defined Radio Front-ends: Scalable waves on the air. 4. SDR Baseband Platforms: Opportunism to combine flexibility and low energy. 5. Software: Fuel for Green SDRs: The blessing and the curse. 6. Energy-Aware Cross-layer Radio Management: Exploit flexibility saving low energy. 7. Towards Cognitive Radios: Getting the best out of the radio and the spectrum. 8. Close: This is not the end, it's just a beginning.
Kundenbewertungen
Schreiben Sie eine Kundenbewertung zu diesem Produkt und gewinnen Sie mit etwas Glück einen 15,- EUR bücher.de–Gutschein!
Bewertung schreiben Bewertung schreiben
Mehr zum Thema