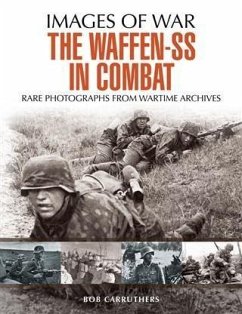 Andere Kunden interessierten sich auch für
Produktbeschreibung
"A photographic history of some of the most elite of Germany's armed forces as they fought on all fronts during World War II . . . Highly recommended."-Scale Military Modeller This is the photographic history of the Waffen-SS in combat on all fronts. The short six-year history of the Waffen-SS spanned triumph and disaster, and their story can be traced through these powerful images, which clearly document the reality of combat from 1940 to 1945. These rare images span the combat history of the Waffen-SS from the optimism of the opening phases of the war in the west through to the challenges of Barbarossa and the long and bloody retreat against a numerically far superior enemy in both the east and the west. The powerful photographic record is essential reading for anyone with an interest in the course of the war from the German perspective and clearly demonstrated the scale of the task undertaken by the Waffen-SS on all fronts. "This collection of b&w historical photos from WWII showcases photos taken by the Germans for propaganda purposes and published in newspapers, magazines, and books between 1940 and 1945. Many of the photos come from the SS-Kriegsberichter-Kompanie (Waffen-SS War Reporters Company), led by Gunter d'Alquen, which recorded actions of platoons. The photos are grouped in three sections on the activities of the Waffen-SS in the west in 1940, in the east in 1941-1943, and in combat and defeat 1943-1945. Each section begins with an introduction giving context on the origins of the photos and the photographers and crews involved. There is also background on the units, platoons, and divisions photographed."-ProtoView