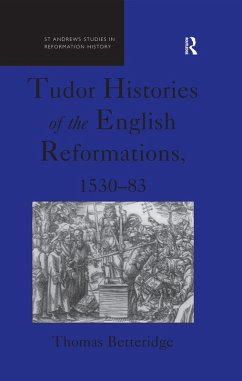 Andere Kunden interessierten sich auch für
Produktbeschreibung
This book examines the Tudor histories of the English Reformation written in the period 1530-83. All the reforming mid-Tudor regimes used historical discourses to support the religious changes they introduced. Indeed the English Reformation as a historical event was written, and rewritten, by Henrician, Edwardian, Marian and Elizabethan historians to provide legitimation for the religious policies of the government of the day. Starting with John Bale's King Johan, this book examines these histories of the English Reformations. It addresses the issues behind Bale's editions of the Examinations of Anne Askewe, discusses in detail the almost wholly neglected history writing of Mary Tudor's reign and concludes with a discussion of John Foxe's Acts and Monuments. In the process of working chronologically through the Reformation historiography of the period 1530-1583 this book explores the ideological conflicts that mid-Tudor historians of the English Reformations addressed and the differences, but also the similarities often cutting across doctrinal differences, that existed between their texts.