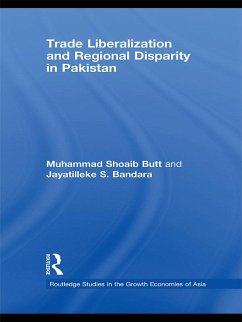 Pakistan's military, which has directly controlled the country's affairs for more than half of its post-independence history and which often retained real political power even during periods of democratic rule, has played a significant role in trade liberalisation. Regional disparities have increased since the beginning of major trade liberalisation attempts in the 1980s and at present, regional conflicts and the associated regional disparities are extremely high. The authors critically review the country's post-independence political economy of trade liberalisation, the resulting structural…mehr

Produktdetails
Produktdetails
Autorenporträt
Dr Muhammad Shoaib Butt is an acting Assistant Director at the Policy and Evaluation branch of the Australian Government Department of Health and Ageing, Canberra, Australia. He has also worked as an economist in the Macroeconomic Policy Division and the International Economy Division of the Commonwealth Traesury, Australia. His research interests include economic modelling, trade, and banking and finance.

Jayatilleke Semasinghe Bandara is an Associate Professor at the Department of Accounting, Finance and Economics, Griffith University, Brisbane, Australia. He has published extensively in the areas of trade, development and economic modelling, particularly focusing on South Asian countries.