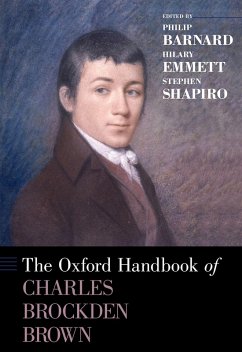 Andere Kunden interessierten sich auch für
Produktbeschreibung
Over the past few decades, the writings of Charles Brockden Brown (1771-1810) have reclaimed a place of prominence in the American literary canon. Yet despite the explosion of teaching, research, and an ever-increasing number of doctoral dissertations, there remains no up-to-date overview of Brown's work. The Oxford Handbook of Charles Brockden Brown provides a state-of-the-art survey of the life and writings of Charles Brockden Brown, a key writer of the Atlantic revolutionary age and U.S. Early Republic. The seven novels he published during his lifetime are now studied for their narrative complexity, innovations in genre, and social-political commentaries on life in early America and the revolutionary Atlantic. Through the late twentieth century, Brown was best known as an author of political romances in the gothic mode that proved to be widely influential in romantic era, and has generated large amounts of scholarship as a crucial figure in the history of the American novel. This Handbook extends its focus beyond the well-known novels to address the full range of Brown's prolific literary career. The Handbook includes original essays on all of Brown's fiction and nonfiction writings, and offers new interpretations of the contexts of his work: from the literary, social, political, and economic to the scientific, commercial, and religious. The thirty-five contributors in this volume speak in new ways about Brown's depictions of literary theory, social justice, sexuality, and property relations, as well as colonialism, slavery, Native Americans, and women's rights. Brown's perspectives on American and global history, emerging modernity, selfhood and otherness, and other topics, are explained in comprehensible and up-to-date terms. In addition to opening up new avenues of research, The Oxford Handbook of Charles Brockden Brown provides the intellectual foundations needed to understand Brown's enduring impact and literary legacy.