How Pessimists, Partisans, and Plutocrats are Transforming the Marketplace of Ideas 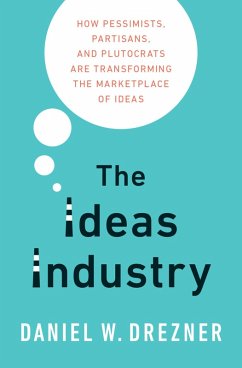 How Pessimists, Partisans, and Plutocrats are Transforming the Marketplace of Ideas

Andere Kunden interessierten sich auch für
Produktbeschreibung
The public intellectual has a long and storied history. Previously, the public intellectual was always expected to opine on a broad array of topics, from foreign policy to economics. Yet in recent years a new kind of thinker has supplanted that archetype: the thought leader. Equipped with one big idea, thought leaders focus their energies on TED talks rather than highbrow periodicals. In contrast to public intellectuals, thought leaders gain fame as single-idea merchants. Their ideas are often laudable and highly ambitious, but they often work through institutions that are closed to the public and less open to criticism. In The Ideas Industry, Daniel W. Drezner explains how this shift happened, pointing to the roles of political polarization, heightened inequality, and eroding trust in authority. In contrast to their predecessors, today's intellectuals are more likely to enjoy the support of ideologically friendly private funders and be housed in ideologically-driven think tanks. Increasing inequality is also a key driver of this shift: more than ever before, contemporary plutocrats fund intellectuals and idea factories that generate arguments that align with their own. Finally, the erosion of trust in experts has lowered the barriers of entry in the marketplace of ideas. But, while there are certainly some downsides to the contemporary ideas industry, Drezner argues that it is very good at broadcasting ideas widely and reaching large audiences hungry for new thinking. Both fair-minded and trenchant, The Ideas Industry reshapes our understanding of contemporary public intellectual life in America and the West.