The Atlas of Breeding Birds in Britain and Ireland (eBook, PDF) 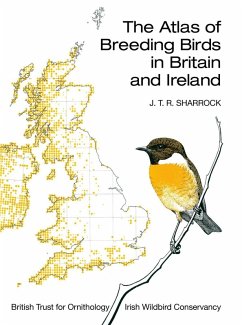 The Atlas of Breeding Birds in Britain and Ireland (eBook, PDF)

This companion volume to The Atlas of Wintering Birds in Britain and Ireland (see back flap) is derived from yearly surveys of breeding birds in Britain and Ireland during 1968-72, organised by the British Trust for Ornithology and the Irish Wildbird Conservancy. Each of the 3,862 10-km squares of Britain and Ireland was visited during the five years and the resulting records (over 285,000) are summarised in the maps.
The full-page maps plot the known distribution of all but 11 of the 229 breeding species located during the survey period. Each map has an accompanying text which describes…mehr

The full-page maps plot the known distribution of all but 11 of the 229 breeding species located during the survey period. Each map has an accompanying text which describes the species' habitat, the problems involved in proving breeding, the historical background to the species' range and any changes in its numbers. The probable reasons for these changes are discussed and an attempt made to assess the total number of birds for each species.

"The book is a major triumph for the BTO and IWC and a fitting reward to the many thousands of field workers who made its compilation possible. It is an indispensable source of up-to-date information, a pleasure to read, a spur to thought and further enquiry, and, by no means least, a most elegant example of book production."
Stanley Cramp, British Birds

"This remarkable work is one of the most exciting ornithological achievements of the century ... the book is admirable in every way: it is beautifully produced, and charmingly illustrated with black and white vignettes on nearly every page of text. Above all, it provides an authoritative account of the present situation; in due course it will also serve as a standard against which to measure future changes. Excellent value and strongly recommended."
G. L. A-W., Wildfowl News Jacket design by Robert Gillmor