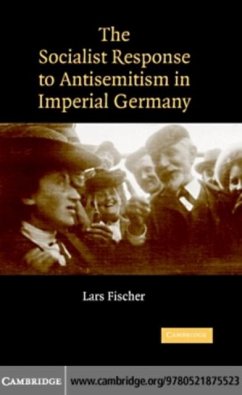 Andere Kunden interessierten sich auch für
Produktbeschreibung
What set antisemites apart from anti-antisemites in Imperial Germany was not so much what they thought about 'the Jews', but what they thought should be done about them. Like most anti-antisemites, German Social Democrats felt that the antisemites had a point but took matters too far. In fact, Socialist anti-antisemitism often did not hinge on the antisemites' anti-Jewish orientation at all. Even when it did, the Socialists' arguments generally did more to consolidate than subvert generally accepted notions regarding 'the Jews'. By focusing on a broader set of perceptions accepted by both antisemites and anti-antisemites and drawing a variety of new sources into the debate, this study offers a startling reinterpretation of seemingly well-rehearsed issues, including the influence of Karl Marx's Zur Judenfrage, and the positions of various leading Social Democrats (Franz Mehring, Eduard Bernstein, August Bebel, Wilhelm Liebknecht, Karl Kautsky, Rosa Luxemburg) and their peers.