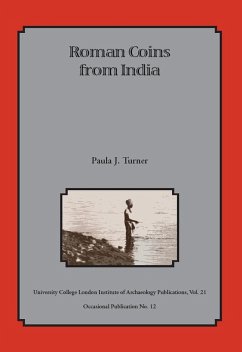 This book is a detailed collation of the recorded finds of Roman coins on Indian soil, divided into Republican, Julio-Claudian and post-Julio-Claudian coins. It also includes chapters on the historical significance of the scarcity of Roman finds, the absence of base metal issues in the early empire, the predominance of early imperial denarii, and the difference in composition between the Julio-Claudian gold and silver hoards. There is considerable discussion on slashed gold coins and defaced silver coins and on imitation Roman coins found in India. Three exhaustive appendices include a…mehr