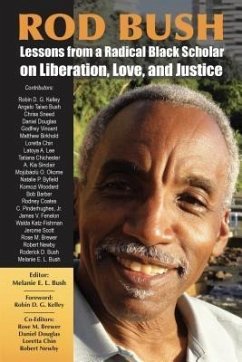 Roderick Douglas Bush (1945-2013) was a scholar, educator, mentor, activist and a loving human being. In reflecting on his life well-lived, the contributors in Rod Bush: Lessons from a Radical Black Scholar on Liberation, Love, and Justiceshare insightful lessons from his life and works on how to effect liberation and radical social transformation in the everyday practices of scholarship, teaching, activism, and personal interaction through a loving spirit dedicated to social justice. Rod Bush was deeply convinced that "Pan-European racism is the Achilles' heel of the modern world-system, and the demographic situation of the United States, with its large, strategically located populations of color, is a key locus of struggle for a more just, democratic, and egalitarian world order." This book shows by the example of Rod Bush how one can "be the change"-through a commitment to everyday practices and personal transformations that embody, enable, embrace, and engage global social change.

This anthology provides deep reflections on the question of how one can live radical principles in contemporary times. What does it mean to be human? How does one embed love and justice in one's worldview and daily practice? Rod Bush, partner, colleague, teacher, mentor, comrade, and friend, was well known as an activist scholar who incorporated his values into his teaching, mentorship and everyday interactions. Therefore, his theoretical interests and practical involvements in movements are intimately linked and simultaneous.

In his foreword, Robin D. G. Kelley shares his intimate views of Rod Bush's life and works. In his view, Rod's "commitment to study and struggle in the service of human liberation knew no boundaries. His vision was planetary. He wrote critically and brilliantly about Black radical movements-here and abroad-and about the destructive power of racism, colonialism, capitalism (the modern world-system), all with the goal of transforming a society based on exploitation, subjugation, and war into a society rooted in mutual benefit, life, and love."

At a historical moment when the political landscape is fraught with volatility, and the Movement for Black Lives and other struggles for dignity and justice gain increasing momentum, Rod's life serves as an example, providing many lessons that we can draw from and practice ourselves. Rod consistently asserted that it is critical to recognize the historical leadership of those involved in struggles for Black Liberation and justice writ large. For, a vision for Black Lives is indeed a vision that benefits all humanity.