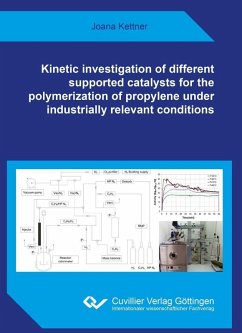 Scope of the work is the kinetic investigation of two fourth generation Ziegler-Natta catalysts as well as a supported metallocene catalyst for the polymerization of propylene under industrially relevant conditions and the development of simplified phenomenological kinetic models describing the polymerizations. Therein, the influence of different reaction conditions (temperature, pressure, hydrogen concentration) and, in particular, the effect of prepolymerization on catalyst kinetics as well as on polymer characteristics are studied. The Ziegler-Natta catalysts were investigated under…mehr