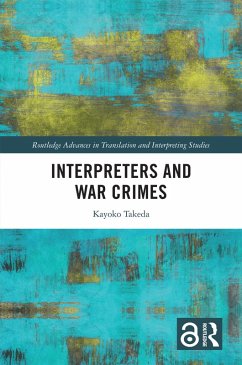 Andere Kunden interessierten sich auch für
Produktbeschreibung
Taking an interdisciplinary approach, this book raises new questions and provides different perspectives on the roles, responsibilities, ethics and protection of interpreters in war while investigating the substance and agents of Japanese war crimes and legal aspects of interpreters' taking part in war crimes. Informed by studies on interpreter ethics in conflict, historical studies of Japanese war crimes and legal discussion on individual liability in war crimes, Takeda provides a detailed description and analysis of the 39 interpreter defendants and interpreters as witnesses of war crimes at British military trials against the Japanese in the aftermath of the Pacific War, and tackles ethical and legal issues of various risks faced by interpreters in violent conflict.

The book first discusses the backgrounds, recruitment and wartime activities of the accused interpreters at British military trials in addition to the charges they faced, the defence arguments and the verdicts they received at the trials, with attention to why so many of the accused were Taiwanese and foreign-born Japanese. Takeda provides a contextualized discussion, focusing on the Japanese military's specific linguistic needs in its occupied areas in Southeast Asia and the attributes of interpreters who could meet such needs. In the theoretical examination of the issues that emerge, the focus is placed on interpreters' proximity to danger, visibility and perceived authorship of speech, legal responsibility in war crimes and ethical issues in testifying as eyewitnesses of criminal acts in violent hostilities. Takeda critically examines prior literature on the roles of interpreters in conflict and ethical concerns such as interpreter neutrality and confidentiality, drawing on legal discussion of the ineffectiveness of the superior orders defence and modes of individual liability in war crimes. The book seeks to promote intersectoral discussion on how interpreters can be protected from exposure to manifestly unlawful acts such as torture.

Produktdetails
Autorenporträt
Kayoko Takeda is a Professor in the College of Intercultural Communication at Rikkyo University in Japan and teaches translation and interpreting studies.