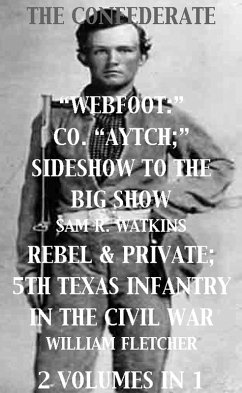 "The Confederate Webfoot: Co. "Aytch"; Maury Grays, First Tennessee Regiment; Sideshow of the Big Show, Rebel & Private, Front & Rear, 5th Texas Infantry, Company "F" in the Civil War . (2 Volumes In 1)" are first hand accounts of the experiences of the Civil War "grunt."
In Book I, Samuel "Sam" R. Watkins 1839-1901 a noted Confederate soldier; known today for this memoir, which is often heralded as one of the best primary sources about the common soldier's Civil War experience. Watkins served throughout the duration of the War. Of the 120 men who enlisted in "Company H" in 1861, only…mehr

In Book I, Samuel "Sam" R. Watkins 1839-1901 a noted Confederate soldier; known today for this memoir, which is often heralded as one of the best primary sources about the common soldier's Civil War experience. Watkins served throughout the duration of the War. Of the 120 men who enlisted in "Company H" in 1861, only seven were alive at the surrender in April 1865. Of 1,200 men who fought in the First Tennessee, only 65 were left to be paroled on that day. His book is sometimes used for teaching purposes, to help students learn what life was like during the Civil War. Heralded by many historians as one of the best war memoirs written by a common field soldier, Sam's writing style is engaging and skillfully captures the pride, misery, glory, and horror experienced by the common foot soldier.

In book II, William A. Fletcher 1839-1915 a citizen of Beaumont, Texas who enlisted in Company F of the 5th Texas Infantry of Hood's Brigade in 1861 recounts his experiences as a Civil War common soldier in a Texas regiment. He fought in the Seven Days' Battle, 2nd Manassas, Gettysburg, Fredericksburg, and Chickamauga. He was twice wounded, at Manassas and Chickamauga, but soon recovered and rejoined his unit. After Chickamauga, his wound was such that he could no longer march long distances. He was then assigned to the 8th Texas Cavalry, aka as Terry's Texas Rangers.

Margaret Mitchell's Civil war epic; "Gone With The Wind" is one of the most accurate as well as vivid portraits of the horrors of the American Civil War. Though fiction, Mitchell took great care to research the history of the War so that her portrayal of the period would be true-to-life. This was true of her civilian characters---Scarlett, Rhett, Melanie, etc., but it was no less true of her depiction of the Confederate soldier. For her research into the Confederate soldier's life and travails she relied heavily on these two non-fiction books by former low-ranking Confederate soldiers. Both of these books provide the stark reality of the struggle of the average Confederate soldier to survive the rigors and horrors of battle and at times, his commanding officers. Stripped of the rhetorical "hollow glory" hot air of the politicians and rear area officers, both books give real meaning to the charge that military carnage is "a rich man's war and a poor man's fight."

Very scarce in the original bindings they are a must-read for the student of Civil War military history interested in the life of the common Confederate "grunt" during the war, as well as the history of the respective individual units of these two Confederate soldiers.

NOTE: This book has been scanned then OCR (Optical Character Recognition) has been applied to turn the scanned page images back into editable text. Then every effort has been made to correct typos, spelling, and to eliminate stray marks picked up by the OCR program. The original and/or extra period images, if any, were then placed in the appropriate place and, finally, the file was formatted for the e-book criteria of the site. This means that the text CAN be re-sized, searches performed, & bookmarks added, unlike some other e-books that are only scanned---errors, stray marks, and all.