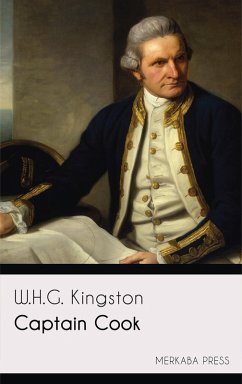 Among all those Englishmen who, from a humble origin, have risen to an honourable position, Captain James Cook is especially worthy of record. His parents were of the peasant class-his father having commenced life as a farm-labourer, and his mother being a cottager's daughter. Probably, however, they were both superior to others of the same station, as the husband, in process of time, became farm-bailiff to his employer-a Mr Thomas Skottowe. This was about the year 1730, and the farm of which he had the management was called Airy-Holme, near Ayton, in Yorkshire. Not far from this place, at the…mehr

Andere Kunden interessierten sich auch für
Produktbeschreibung
Among all those Englishmen who, from a humble origin, have risen to an honourable position, Captain James Cook is especially worthy of record. His parents were of the peasant class-his father having commenced life as a farm-labourer, and his mother being a cottager's daughter. Probably, however, they were both superior to others of the same station, as the husband, in process of time, became farm-bailiff to his employer-a Mr Thomas Skottowe. This was about the year 1730, and the farm of which he had the management was called Airy-Holme, near Ayton, in Yorkshire. Not far from this place, at the village of Marton, near Stockton-upon-Tees; his son James was born, on October 27, 1728. James was one of nine children, all of whom he survived, with the exception of a sister who married a fisherman at Redcar.

The father of this family spent the latter years of his life with his daughter at Redcar, and was supposed to have been about eighty-five years old at the time of his death; so that he must have had the satisfaction of seeing his son rising in his profession, though probably he little thought of that son as establishing a fame which would be handed down in history.

James Cook does not appear to have enjoyed any peculiar educational advantages, but owed his subsequent advancement chiefly to his own intelligence, perseverance, and diligence. He first went to a village school, and was afterwards sent, at the expense of Mr Skottowe, to an ordinary commercial school, kept by a Mr Pullen. He continued there four years, and was then apprenticed to Mr William Sanderson, a grocer and haberdasher at the fishing town of Straiths, ten miles from Whitby. It may be supposed that the occupation in which he was engaged was not suited to his taste. The sea was constantly before his eyes, and the desire to seek his fortune on it sprang up within him, and grew stronger and stronger, till in about a year after he went to Straiths he obtained a release from his engagement with Mr Sanderson, and apprenticed himself to Messrs Walker and Company, shipowners of Whitby. He went to sea for the first time when he was about eighteen, on board one of their vessels-the Truelove collier, (Note 1) of four hundred and fifty tons burden, trading between Newcastle and London. The lad soon showed that he was well fitted for his new profession, and in 1748, not two years after he had commenced it, we find him especially directed to assist in fitting for sea the Three Brothers, a new ship of six hundred tons. While he served on board this ship she was hired by Government as a transport; and on her being paid off she was employed in the Norway trade.

After making several voyages in the Three Brothers up the Baltic, young Cook was promoted to the rank of mate on board the Friendship. He had by this time gained the goodwill of his employers; and had made several other friends on shore, who, before long, were enabled to render him essential service. He was now known as a thorough seamen; indeed, from the moment he went on board ship, he had steadily applied his mind to acquiring a knowledge of his profession. Still he served on as mate of the Friendship till the breaking out of the war between England and France in 1756, when he made up his mind to push his fortunes in the Royal Navy. He knew that at all events there was a great probability of his being pressed into the service, and he had good reason to hope that he might be placed ere long on the quarter-deck, since many young men at that time had been who went to sea, as he had done, before the mast. He accordingly volunteered, and entered as an able seaman on board the Eagle, of sixty guns, then commanded by Captain Hamer, but shortly afterwards by Captain Palliser, who became the well-known Sir Hugh Palliser-Cook's warm and constant friend.

As soon as the young sailor's Yorkshire friends heard that he had entered on board a man-of-war, they exerted themselves on his behalf, and a letter of introduction was procured from Mr Osbaldeston, Member for the county, to his captain, who, having already remarked the intelligence and assiduity Cook exhibited in all his professional duties, was the more ready to give him a helping hand...

Produktdetails
Autorenporträt
William Henry Giles Kingston was born in Harley Street, London on 28 February 1814. He was the eldest son of Lucy Henry Kingston (d.1852) and his wife Frances Sophia Rooke (b.1789), daughter of Sir Giles Rooke, Judge of the Court of Common Pleas. Kingston's paternal grandfather John Kingston (1736-1820) was a Member of Parliament who staunchly supported the Abolition of the Slave Trade, despite having a plantation in Demerara. His father Lucy entered into the wine business in Oporto,[1] and Kingston lived there for many years, making frequent voyages to England and developing a lifelong affection for the sea. He was educated at Trinity College, Cambridge and afterwards entered his father's wine business, but soon indulged in his natural bent for writing. His newspaper articles on Portugal were translated into Portuguese, and assisted the conclusion of the commercial treaty with Portugal in 1842, when he received from Donna Maria da Gloria an order of Portuguese knighthood and a pension. His first book was The Circassian Chief, a story published in 1844. While still living in Oporto, he wrote The Prime Minister, a historical novel, and Lusitanian Sketches, descriptions of travels in Portugal. Settling in England, he interested himself in the emigration movement, edited The Colonist and The Colonial Magazine and East India Review in 1844, was honorary secretary of a colonisation society, wrote Some Suggestions for a System of General Emigration in 1848, lectured on colonisation in 1849, published a manual for colonists entitled How to Emigrate in 1850, and visited the western highlands on behalf of the emigration commissioners. He was afterwards a zealous volunteer and worked actively for the improvement of the condition of seamen. But from 1850, his chief occupation was writing books for boys, or editing boys' annuals and weekly periodicals.
Kundenbewertungen
Schreiben Sie eine Kundenbewertung zu diesem Produkt und gewinnen Sie mit etwas Glück einen 15,- EUR bücher.de–Gutschein!
Bewertung schreiben Bewertung schreiben