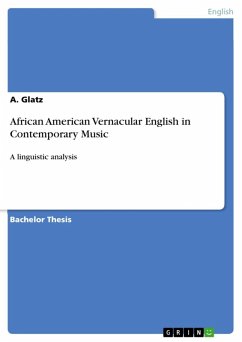 Andere Kunden interessierten sich auch für
Produktbeschreibung
Bachelor Thesis from the year 2011 in the subject English Language and Literature Studies - Linguistics, grade: 2,0, Justus-Liebig-University Giessen, language: English, abstract: This thesis investigates the use of African American Vernacular English in contemporary music. AAVE is an ethnic variety spoken by many, though not all, African Americans living in the United States. This dialect does not have one name only, but is also called "Negro dialect," "Nonstandard Negro English," "Black English," "Black Street Speech," "Black Vernacular English," "Black Vernacular English," or "African American English." I would like to add that some terms are historical. It is crucial to know that researchers call it differently because to a large degree it depends on the time he/she conducted research on this topic. Today, the dialect is either called African American Vernacular English or African American English. The words "contemporary music" in the title refer to Hip Hop. This music genre was chosen to be investigated because out of the music genres African Americans are involved in, it is the one that generates most of the sales and is the most popular one. The rappers which are going to be analyzed in this thesis use many of the features of the African American vernacular. Given the huge number of AAVE features, only one of them will be analyzed, the copula verb to be, which in the following will only be called "the copula." According to Wolfram, the copula is "one of the most often described structures of AAVE" (2008: 517). For this reason, the copula might be an interesting feature to look at. When researchers examined AAVE in the past, they did not necessarily take music as a source of data, but rather spoken language. One has to know that language in music is a different genre of language use, which differs from the usual use of the language. Music can be considered an artistic expression, but not "real" speech. Nevertheless, as music has always been and presumably will always be a big part in African American culture, it should be possible to recognize features of AAVE and use music as a reliable source. In the analysis conducted in this thesis, the use of the copula will be examined by having a look at the lyrics of three famous rappers from the US: Tupac, Jay-Z and 50 Cent. Even though the three of them can be assigned to "gangsta rap", they all differ from each other. They all started their careers in different decades, come from different cities and have a different style of rapping. What they have in common is that they are African American rappers from a lower class who grew up in poverty and have become successful musicians.