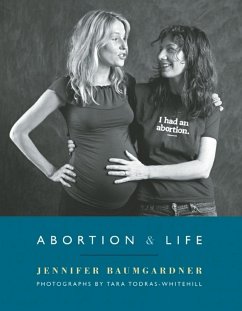 Andere Kunden interessierten sich auch für
Produktbeschreibung
"In her role as author and activist, Jennifer Baumgardner has permanently changed the way people think about feminism . . . and will shape the next hundred years of politics and culture.”-The Commonwealth Club of California, hailing Baumgardner as one of Six Visionaries for the Twenty-First Century "If Jennifer Baumgardner ever needs another mom, I'll be the first in line to adopt her. She's smart, fearless, and a formidable force for change.”-Barbara Ehrenreich, author of Nickel and Dimed In Abortion & Life, author and activist Jennifer Baumgardner reveals how the most controversial and stigmatized Supreme Court decision of our time cuts across eras, classes, and race. Stunning portraits by photographer Tara Todras-Whitehill of folk singer Ani DiFranco, authors Barbara Ehrenreich and Gloria Steinem, and others accompany their elucidating accounts of their own abortion experiences. In this bold new work, Baumgardner explores some of the thorniest issues around terminating a pregnancy, including the ones that the pro-choice establishment has been the least sensitive or effective in confronting. Jennifer Baumgardner is the producer/creator of the award-winning film I Had an Abortion. She is the co-author (with Amy Richards) of Manifesta: Young Women, Feminism, and the Future and Grassroots: A Field Guide for Feminist Activism (both Farrar, Straus & Giroux). Her most recent book is Look Both Ways: Bisexual Politics (FSG, 2007). She writes regularly for women's magazines like Glamour, Elle, and Allure, as well as more political outlets such as The Nation, Harper's, and NPR's All Things Considered. She lives in New York City. Praise for Abortion & Life: Publishers Weekly, Sept. 2008 Activist, filmmaker (of I Had an Abortion) and co-author (Manifesta: Young Women, Feminism and the Future) Baumgardner dedicates her work to spreading awareness about abortion. Graced with black and white photo portraits by Tara Todras-Whitehill of women wearing Baumgardner's shirt, reading simply "I had an abortion,” the emphasis is on the testimony of these patients, revealing not only how common the procedure is (one in three women, according to the Guttmacher Institute) but how diverse those women and their situations are. Baumgardner begins with a brief history of abortion legislation in America, from pre-Roe v. Wade restrictions to clinic workers and doctors protested, threatened and murdered (as in the case of Buffalo doctor Barnett Slepian). Still, as Baumgardner says, it's the record of "our lives [that] might provide the best road map to strengthening women's reproductive freedoms.” Included is a comprehensive listing of abortion resources, and 10 percent of the book's profits go to the New York Abortion Access Fund. "An effort at finding the middle ground on a contentious issue...Baumgardner's dedication to widening and civilizing the discussion is clear. She instructs, hopefully; this book belongs in the hands of a new generation of abortion-rights advocates, who can benefit from its history and might strive to answer its difficult questions."-Los Angeles Times