The Invention of Nature (eBook, ePUB) 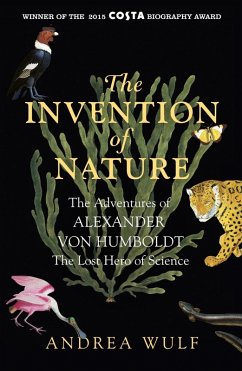 The Invention of Nature (eBook, ePUB)

WINNER OF THE 2015 COSTA BIOGRAPHY AWARD
WINNER OF THE ROYAL SOCIETY SCIENCE BOOK PRIZE 2016
'A thrilling adventure story' Bill Bryson
'Dazzling' Literary Review
'Brilliant' Sunday Express
'Extraordinary and gripping' New Scientist
'A superb biography' The Economist
'An exhilarating armchair voyage' GILES MILTON, Mail on Sunday
Alexander von Humboldt (1769-1859) is the great lost scientist - more things are named after him than anyone else. There are towns, rivers, mountain ranges, the ocean current that runs along the South American coast, there's a…mehr

'A superb biography' The Economist

Alexander von Humboldt (1769-1859) is the great lost scientist - more things are named after him than anyone else. There are towns, rivers, mountain ranges, the ocean current that runs along the South American coast, there's a penguin, a giant squid - even the Mare Humboldtianum on the moon.

His colourful adventures read like something out of a Boy's Own story: Humboldt explored deep into the rainforest, climbed the world's highest volcanoes and inspired princes and presidents, scientists and poets alike. Napoleon was jealous of him; Simon Bolívar's revolution was fuelled by his ideas; Darwin set sail on the Beagle because of Humboldt; and Jules Verne's Captain Nemo owned all his many books. He simply was, as one contemporary put it, 'the greatest man since the Deluge'.

Taking us on a fantastic voyage in his footsteps - racing across anthrax-infected Russia or mapping tropical rivers alive with crocodiles - Andrea Wulf shows why his life and ideas remain so important today. Humboldt predicted human-induced climate change as early as 1800, and The Invention of Nature traces his ideas as they go on to revolutionize and shape science, conservation, nature writing, politics, art and the theory of evolution. He wanted to know and understand everything and his way of thinking was so far ahead of his time that it's only coming into its own now. Alexander von Humboldt really did invent the way we see nature.

Produktdetails
Autorenporträt
ANDREA WULF was born in India and moved to Germany as a child. She lives in London, where she trained as a design historian at the Royal College of Art. She is the author of Chasing Venus, Founding Gardeners, and The Brother Gardeners, which was long-listed for the Samuel Johnson Prize and awarded the American Horticultural Society Book Award. She has written for The New York Times, the Financial Times, The Wall Street Journal, and the Los Angeles Times. She appears regularly on radio and TV, and in 2014 copresented British Gardens in Time, a four-part series on BBC television.

Andrea Wulf is a writer of rare sensibilities and passionate fascinations. I always trust her to take me on unforgettable journeys through amazing histories of botanical exploration and scientific unfolding. Her work is wonderful, her language sublime, her intelligence unflagging.
Elizabeth Gilbert, bestselling author of The Signature of All Things and Big Magic

The Invention of Nature is a big, magnificent, adventurous book so vividly written and daringly researched a geographical pilgrimage and an intellectual epic! With brilliant, surprising, and thought-provoking connections to Simón Bolívar, Charles Darwin, William Herschel, Charles Lyell, Walt Whitman, Edgar Allen Poe, Henry David Thoreau, and George Perkins Marsh. The book is a major achievement.
Richard Holmes, author of Coleridge and The Age of Wonder

Alexander von Humboldt may have been the preeminent scientist of his era, second in fame only to Napoleon, but outside his native Germany his reputation has faded. Wulf does much to revive our appreciation of this ecological visionary through her lively, impressively researched account of his travels and exploits, reminding us of the lasting influence of his primary insight: that the Earth is a single, interconnected organism, one that can be catastrophically damaged by our own destructive actions.
The New York Times Book Review, Top 10 Books of the Year
Andrea Wulf reclaims Humboldt from the obscurity that has enveloped him. . . . [She] is as enthusiastic as her subject. . . . Vivid and exciting. . . . Wulf s pulsating account brings this dazzling figure back into a dazzling, much-deserved focus.
Matthew Price, The Boston Globe

[Makes an] urgent argument for Humboldt s relevance. The Humboldt in these pages is bracingly contemporary; he acts and speaks in the way that a polyglot intellectual from the year 2015 might, were he transported two centuries into the past and set out to enlighten the world s benighted scientists and political rulers. . . . At times The Invention of Nature reads like pulp explorer fiction, a genre at least partially inspired by Humboldt s own travelogues. . . . It is impossible to read The Invention of Nature without contracting Humboldt fever. Wulf makes Humboldtians of us all.
Nathaniel Rich, New York Review of Books

From Russia to the jungles of South America to the Himalayas, an intrepid explorer s travels make for exhilarating reading. . . . Wulf imbues Humboldt s adventures . . . with something of the spirit of Tintin, relishing the jungles, mountains and dangerous animals at every turn. . . . A superior celebration of an adorable figure.
Simon Winder, The Guardian (London), Best Books of the Year

A superb biography. Andrea Wulf makes an inspired case for Alexander von Humboldt to be considered the greatest scientist of the 19th century. . . . Wulf is especially good, [on the ways that] his ideas enjoyed an afterlife. . . . Ecologists today, Ms. Wulf argues, are Humboldtians at heart. With the immense challenge of grasping the global consequences of climate change, Humboldt s interdisciplinary approach is more relevant than ever.
The Economist, Best Books of the Year

Marvelous. . . . On one level, [The Invention of Nature] is a rollicking adventure story. . . . Yet it is also a fascinating history of ideas.
Sarah Darwin, Financial Times This book sets out to restore Humboldt to his rightful place in the pantheon of natural scientists. In the process, Wulf does a great deal more. This meticulously researched work part biography, part cabinet of curiosities takes us on an exhilarating armchair voyage through some of the world s least hospitable regions, from the steaming Amazon basin to the ice-fringed peaks of Kazakhstan.
Giles Milton, Mail on Sunday (London)

In its mission to rescue Humboldt s reputation from the crevasse he and many other German writers and scientists fell into after the Second World War, it succeeds.
Joy lo Dico, The Independent (London)

A dazzling account of Humboldt s restless search for scientific, emotional and aesthetic satisfaction. Unapologetically in awe of her subject and intent on restoring Humboldt s reputation, [Wulf] brings his ideas to the foreground their emergence, spread and evolution after his death. . . . Wulf goes as far as to say that modern environmentalists, ecologists and nature writers are still drawing from his oeuvre, even if they have never heard of him. . . . With the environmental movement, ecology and climate science, Wulf argues, we may have entered another period in which connections predominate over isolated proofs, bringing renewed relevance to Humboldt s grand visions of nature, the world and the universe.
Patrick Wilcken, Literary Review (UK)

Wulf, a historian with an invaluable environmental perspective, presents with zest and eloquence the full story of Humboldt s adventurous life and extraordinary achievements. . . . Humboldt, Wulf convincingly argues in this enthralling, elucidating biography, was a genuine visionary, whose insights we need now more than ever.
Donna Seaman, Booklist (starred review)

I lavish praise on Andrea Wulf s new book, The Invention of Nature. . . . The gist of my praise is simple. Wulf recognized not only a good story but also an important one. She has written a fascinating book about a fascinating man whose work influences our thinking even though his name is no longer widely remembered. . . . Wulf s book is about a long-dead great man but also about ourselves.
Bill Streever, The Dallas Morning News

Humboldt . . . electrified fellow polymaths such as Johann Wolfgang von Goethe, discovered climate zones, and grasped the impact of industrialization on nature. In her coruscating account, historian Andrea Wulf reveals an indefatigable adept of close observation with a gift for the long view, as happy running a series of 4,000 experiments on the galvanic response as he was exploring brutal terrain in Latin America.
Barbara Kiser, Nature

Why is the man who predicted climate change forgotten? . . . German-born Andrea Wulf, author of The Invention of Nature: Alexander von Humboldt s New World, has made it her mission to put a new shine on his reputation and show why he still has much to teach us.
Simon Worrall, National Geographic

Engrossing. . . . Wulf magnificently recreates Humboldt s dazzling, complex personality and the scope of his writing. . . . Her book fulfills her aim to restore Humboldt to his place in the pantheon of nature and science, revealing his approach as a key source for our modern understanding of the natural world.
Jenny Uglow, The Wall Street Journal

Gripping. . . . Wulf has delved deep into her hero s life and travelled widely to feel nature as he felt it. . . . No one who reads this brilliant book is likely to forget Humboldt.
Stephanie Pain, New Scientist

Exuberant, delightful. . . . Wulf is unquestionably right that von Humboldt a happy, sarcastic, preternaturally talented polymath is far less well-known outside of Germany than he should be. If The Invention of Nature reaches the wide readership it deserves, we can hope that situation will change.
Steve Donoghue, Open Letters Monthly

Wulf (Chasing Venus) makes an impassioned case for the reinstatement of the boundlessly energetic, perpetually curious, prolific polymath von Humboldt (1769 1859) as a key figure in the history of science. . . . Wulf s stories of wilderness adventure and academic exchange flow easily, and her affection for von Humboldt is contagious.
Publishers Weekly (starred review), Best Books of the Year

Engrossing. . . . Humboldt was the Einstein of the 19th century but far more widely read, and Wulf successfully combines a biography with an intoxicating history of his times.
Kirkus Reviews (starred review), Best Books of the Year

This is a truly wonderful book. The German-speaking world does not need to be reminded of Alexander Humboldt, the last universal genius of European history. The English-speaking world does, astonishingly, need such a reminder, and Andrea Wulf has told the tale with such brio, such understanding, such depth. The physical journeyings, all around South America when it was virtually terra incognita, are as exciting as the journeys of Humboldt s mind into astronomy, literature, philosophy and every known branch of science. This is one of the most exciting intellectual biographies I have ever read, up there with Lewes s Goethe and Ray Monk s Wittgenstein. And all around the subject is the world, gradually learning to be modern sometimes it knew it was being taught by Humboldt, sometimes not, but there is hardly a branch of knowledge which he did not touch and influence. Hoorah, hoorah!!
A. N. Wilson, author of The Victorians and Victoria: A Life

Andrea Wulf s marvelous book should go a long way towards putting this captivating eighteenth century German scientist, traveler and opinion-shaper back at the heart of the way we look at the world which Humboldt helped to interpret, and whose environmental problems he predicted. She has captured the excitement and intimacy of his experiences within the pages of this irresistible and consistently absorbing life of a man whose discoveries have shaped the way we see.
Miranda Seymour, author of Noble Endeavors: A History of England and Germany…mehr
Kundenbewertungen
Schreiben Sie eine Kundenbewertung zu diesem Produkt und gewinnen Sie mit etwas Glück einen 15,- EUR bücher.de–Gutschein!
Bewertung schreiben Bewertung schreiben
Mehr zum Thema