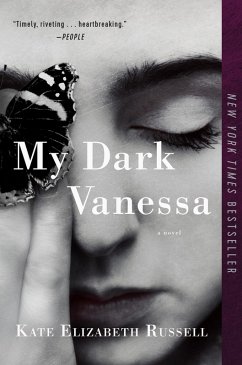 "To call this book a 'conversation piece' or 'an important book' feels belittling . . . [it] is so much more than that. It's a lightning rod. A brilliantly crafted novel.”—The Washington Post

Exploring the psychological dynamics of the relationship between a precocious yet naïve teenage girl and her magnetic and manipulative teacher, a brilliant, all-consuming read that marks the explosive debut of an extraordinary new writer.

2017. Amid the rising wave of allegations against powerful men, a reckoning is coming due. Strane has been accused of sexual abuse by a former student, who reaches out to Vanessa, and now Vanessa suddenly finds herself facing an impossible choice: remain silent, firm in the belief that her teenage self willingly engaged in this relationship, or redefine herself and the events of her past. But how can Vanessa reject her first love, the man who fundamentally transformed her and has been a persistent presence in her life? Is it possible that the man she loved as a teenager—and who professed to worship only her—may be far different from what she has always believed?

Alternating between Vanessa's present and her past, My Dark Vanessa juxtaposes memory and trauma with the breathless excitement of a teenage girl discovering the power her own body can wield. Thought-provoking and impossible to put down, this is a masterful portrayal of troubled adolescence and its repercussions that raises vital questions about agency, consent, complicity, and victimhood. Written with the haunting intimacy of The Girls and the creeping intensity of Room, My Dark Vanessa is an era-defining novel that brilliantly captures and reflects the shifting cultural mores transforming our relationships and society itself.


Produktdetails
Autorenporträt
Kate Elizabeth Russell is originally from eastern Maine. She holds a PhD in creative writing from the University of Kansas and an MFA from Indiana University. My Dark Vanessa is her first novel.

Kate Elizabeth Russel’s novel really is a hell of a read. Using the first person narrator perspective, you climb into Vanessa’s head and get her thinking without any filter. More than once I was stunned, abhorred, terrified or just could shake my head in disbelieve. This girl – even as a grown up woman – is totally captured in her construction of the world, her oftentimes limited capacities of assessing a situation and the naivety with which she confronts her treacherous teacher is one of the best and highly authentic characters I have read about in a while. Even though I could hardly be farther away in my own thinking, I can easily imagine that her state of mind can be found in many girls who are insecure and a bit detached from her classmates.

This novel certainly is not for the highly sensitive. Child abuse and sexual harassment have been topics I have been faced with in my job and in my opinion, “My Dark Vanessa” is a superb example of how a molester gets closer to his victim and which techniques of manipulation he can use to make a girl or woman comply with his wishes. Blaming the victim for what has happened is one of the most loathsome strategies but quite typical and more than once I cringed while reading. Several times, Vanessa senses that something is not right, she feels maybe not abused but her wishes and needs are not respected but she does not possess the mental force or the words to express her position. Even when she is older, it takes some time for her to say it out loud what all that happened has to be called. Possibly her own understanding helped her to cope with the situation better than others, nevertheless, at 32, she is a total mess and far from mentally stable.

A wonderful novel in many respects. Not an easy topic to write about, but an exceptional development of the characters and by using flashbacks also an excellent way of presenting two interpretations of the same incident, the younger and the older Vanessa are not the same anymore. “My Dark Vanessa” was highly praised as one of the most remarkable and important debuts of 2020 – I could hardly agree more with this.
Bezieht sich auf folgende Ausgabe: eBook, ePUB
War diese Bewertung für Sie hilfreich?
JaNein
Hilfreicher Kommentar
Mehr zum Thema