A Funny Book About Horrible Things 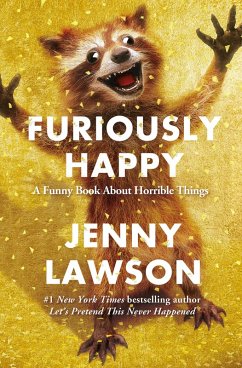 A Funny Book About Horrible Things

In Furiously Happy , #1 New York Times bestselling author Jenny Lawson explores her lifelong battle with mental illness. A hysterical, ridiculous book about crippling depression and anxiety? That sounds like a terrible idea.
But terrible ideas are what Jenny does best.
As Jenny says :
"Some people might think that being 'furiously happy' is just an excuse to be stupid and irresponsible and invite a herd of kangaroos over to your house without telling your husband first because you suspect he would say no since he's never particularly liked kangaroos. And that would be ridiculous…mehr

But terrible ideas are what Jenny does best.

"Some people might think that being 'furiously happy' is just an excuse to be stupid and irresponsible and invite a herd of kangaroos over to your house without telling your husband first because you suspect he would say no since he's never particularly liked kangaroos. And that would be ridiculous because no one would invite a herd of kangaroos into their house. Two is the limit. I speak from personal experience. My husband says that none is the new limit. I say he should have been clearer about that before I rented all those kangaroos.

"Most of my favorite people are dangerously fucked-up but you'd never guess because we've learned to bare it so honestly that it becomes the new normal. Like John Hughes wrote in The Breakfast Club, 'We're all pretty bizarre. Some of us are just better at hiding it.' Except go back and cross out the word 'hiding.'"

Lawson is beloved around the world for her inimitable humor and honesty, and in Furiously Happy, she is at her snort-inducing funniest. This is a book about embracing everything that makes us who we are - the beautiful and the flawed - and then using it to find joy in fantastic and outrageous ways. Because as Jenny's mom says, "Maybe 'crazy' isn't so bad after all." Sometimes crazy is just right.


Produktdetails
Autorenporträt
Lawson, Jenny
JENNY LAWSON, The Bloggess, is an award-winning humor writer known for her great candor in sharing her struggle with depression and mental illness. Her two memoirs, Let's Pretend This Never Happened and Furiously Happy, were #1 New York Times bestsellers.
Inhaltsangabe
A Series of Unfortunate Disclaimers Note from the Author Furiously Happy. Dangerously Sad. I've Found a Kindred Soul and He Has a Very Healthy Coat My Phone Is More Fun to Hang Out with Than Me I Have a Sleep Disorder and It's Probably Going to Kill Me or Someone Else How Many Carbs are in a Foot? Pretend You're Good at It George Washington's Dildo I'm Not Psychotic. I Just Need to Get in Front of You in Line. Why Would I Want to Do More When I'm Already Doing So Well at Nothing? What I Say to My Shrink vs. What I Mean LOOK AT THIS GIRAFFE The Fear Skinterventions and Bangtox It's Like Your Pants Are Bragging at Me Nice Bass It's Hard to Tell Which of Us Is Mentally Ill I Left My Heart in San Francisco. (But Replace "San Francisco" with "Near the Lemur House" and Replace "Heart" with a Sad Question Mark.) Stock up on Snow Globes. The Zombie Apocalypse Is Coming. Appendix: An Interview with the Author I'm Turning into a Zombie One Organ at a Time Cats Are Selfish Yawners and They're Totally Getting Away with It Koalas Are Full of Chlamydia Voodoo Vagina The World Needs to Go on a Diet. Literally. Crazy Like a Reverse Fox An Essay on Parsley, Wasabi, Cream Cheese, and Soup And Then I Got Three Dead Cats in the Mail Things I May Have Accidentally Said During Uncomfortable Silences My Skeleton Is Potaterrific It's Called "Catouflage" We're Better Than Galileo. Because He's Dead. Things My Father Taught Me I'm Going to Die. Eventually. And This Is Why I Prefer to Cut My Own Hair It's All in How You Look at It (The Book of Nelda) Well at Least Your Nipples Are Covered Death by Swans Is Not as Glamorous as You'd Expect The Big Quiz Cat Lamination That Baby Was Delicious These Cookies Know Nothing of My Work It Might Be Easier. But It Wouldn't Be Better. Epilogue: Deep in the Trenches Acknowledgments
Rezensionen
"Jenny made me laugh so hard I feared for my safety! I think that's how she was able to get past my defenses and make me feel more okay about myself." -Allie Brosh, author of Hyperbole and a Half "You'll laugh, wince, writhe in discomfort, cry, then laugh again. You might even feel the need to buy a raccoon. But the two things you'll never do is doubt Jenny's brilliance or her fearlessness when it comes to having honest discussions about mental illness, shame, and the power of human resilience. She's changing the conversation one rented sloth at a time." -Brené Brown, Ph.D., LMSW, author of the #1 New York Times Bestseller, Daring Greatly "I freaked strangers out by snort-laughing on the subway and in restaurants. I can't stop talking about this book to friends. I'll shut up now and let you resume your life but buy this book. It's AMAZING." -Paul Fischer, author of A Kim Jong-Il Production "The Bloggess writes stuff that actually is laugh-out-loud, but you know that really you shouldn't be laughing and probably you'll go to hell for laughing, so maybe you shouldn't read it. That would be safer and wiser." -Neil Gaiman "Even when I was funny, I wasn't this funny." -Augusten Burroughs, author of Running with Scissors and This Is How "Lawson's self-deprecating humor is not only gaspingly funny and wonderfully inappropriate; it allows her to speak...in a real and raw way." -O, The Oprah Magazine "[Lawson] writes with a rambling irreverence that makes you wish she were your best friend." -Entertainment Weekly "Take one part David Sedaris and two parts Chelsea Handler and you'll have some inkling of the cockeyed humor of Jenny Lawson...[She] flaunts the sort of fearless comedic chops that will make you spurt Diet Coke through your nose." -Parade…mehr
Kundenbewertungen
Schreiben Sie eine Kundenbewertung zu diesem Produkt und gewinnen Sie mit etwas Glück einen 15,- EUR bücher.de–Gutschein!
Bewertung schreiben Bewertung schreiben
Mehr zum Thema
Mehr aus der Kategorie eBook > Belletristik > Fremdsprachige Bücher > Englisch > Biografien & Erinnerungen