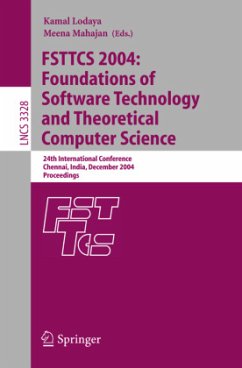 The 35 revised full papers presented together with 5 invited papers were carefully reviewed and selected from 176 submissions. The papers address a broad variety of current issues in software science, programming theory, systems design and analysis, formal methods, mathematical logic, mathematical foundations, discrete mathematics, combinatorial mathematics, complexity theory, automata theory, and theoretical computer science in general.The international conference on the Foundations of Software Technology and Theoretical Computer Science (FSTTCS) is the longest-running conference on computer science in India, and is organized under the aegis of the Indian As- ciation for Research in Computing Science, IARCS. Since its inception in 1981, the conference (held annually in the month of December) has helped in nurt- ing and creating an environment for the exchange of ideas amongst the research community in the country, by attracting top scientists around the world to the conference. This volume contains the proceedings of the 24th FSTTCS conf- ence held in December 2004. A strong point of the FSTTCS programmes has been excellent invited talks by eminent computer scientists of international renown. Continuing this t- dition, this FSTTCS featured invited talks by Javier Esparza, Piotr Indyk, Pavel A. Pevzner, John C. Reynolds, and Denis Th erien. We thank our invited speakers for readily agreeing to come to FSTTCS, and for providing write-ups for the proceedings. It is our pleasure that IARCS chose to honor Prof. Rani Siromoney at this conference, on the occasion of her 75th birthday. The in?uence she has wielded (and the impact she has exerted) in Indian theoretical computer science is tremendous, and the tribute is ?tting and richly deserved. We thank R.K. Sh- masundar for chairing the special session in her honor, and Kamala Krithivasan and K.G. Subramanian for speaking at the session.