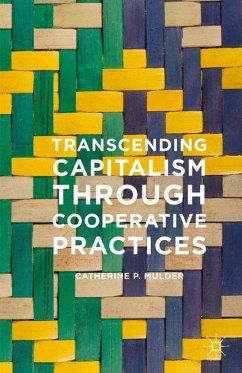 Andere Kunden interessierten sich auch für
Produktbeschreibung
Transcending Capitalism Through Cooperative Practices identifies and analyzes sustainable alternatives to capitalism by examining five diverse enterprises, including the London Symphony Orchestra, the Green Bay Packers football team, and the Lusty Lady sex club.
Produktdetails
Autorenporträt
Catherine P. Mulder is Associate Professor of Economics at John Jay College of Criminal Justice, City University of New York, USA, and also teaches in the Masters of Labor Studies program at CUNY's Murphy Institute. A former cable splicer for the telephone company, Mulder has been a worker advocate and labor activist for over 30 years. Because of her roots, she now dedicates her research, teaching, and service to improving workers' rights and their conditions of employment.
Inhaltsangabe
1. Transcending Capitalism Through Cooperative Practices
2. The London Symphony Orchestra: Still Afloat
3. Capitalism's Triumph: The Case of the Lusty Lady
4. From a Sit-Down Strike to a Cooperative: New Era Cooperative
5. A Worker Self-Directed Enterprise In State Capitalist Cuba!
6. The Green Bay Packers: "A Love Story Between a Community and a Team"
7. What's Next For Capitalism? Can We Transcend it?
Rezensionen
"What do a group of orchestra musicians, the Green Bay Packers, an urban farm, a credit union, a Midwest factory, and a sex club have in common? They have created successful, long-lasting, thriving organizations that are alternatives to the standard capitalist model of an enterprise. Through six detailed cases, Mulder weaves an intriguing and entertaining story of how worker ownership and participation can thrive in a surprising variety of environments, providing a glimpse at an alternative economic model." - Elaine Bernard, Executive Director, Labor and Worklife Program, Harvard Law School, USA

"On economic, political, and moral grounds, capitalism is challenged now from the standpoint of an alternative form of organizing production. Known as worker cooperatives, this alternative is fast becoming a major objective for a remarkable diversity of people. In poor but also rich countries, among service providers as well as goods producers, for unionized, non-unionized, and unemployed workers alike, even for the United Nations and the new Pope, cooperatively organized enterprises are increasingly more important. Mulder's new book excellently explores their theory and examines concrete examples of cooperative enterprises." - Richard D. Wolff, Professor Emeritus, University of Massachusetts, Amherst, USA and The New School, USA

"This is the type of firm-specific class analysis that is essential for envisioning non-capitalist forms of production. Mulder's method and findings orient the compass not only for the future of Marxian thought but all of economic and social theory interested in new ways to organize production and society." - David M. Brennan, Associate Professor, Franklin & Marshall College, USA

"Mulder's latest book is another important and innovative contribution to labor scholarship. In it she uses new Marxian class analysis (NMCA) to examine six diverse case studies of cooperative enterprises. They range from classical music (the London Symphony Orchestra), to sex work (the Lusty Lady peep show cooperative), to manufacturing (the New Era Window Cooperative), to farming (the Cuban Organic Urban Garden), to professional football (the Green Bay Packers), to finance (the Syracuse Cooperative Federal Credit Union). This strategy enables her to illuminate the conditions that lead to successful worker self-directed enterprises (WSDE) as well as the institutions and structures that impede them. NCMA allows her to demonstrate how some of these impediments stem from the larger capitalist economy in which these cooperatives are embedded, and while others stem from preconceived notions about gender and socially-sanctioned labor/management practices. One of the important strengths of NMCA is that it allows scholars to analyze the various interrelated and overdetermined factors that help to determine success or failure." - Drucilla K. Barker, Professor, University of South Carolina, USA

"Mulder's Transcending Capitalism through Cooperative Practices demonstrates that the road to a just, democratic economy may be more direct than we have tended to think. From London, to Chicago, to Havana, and beyond, working people are taking control of their economic lives, collectively owning and often collectively managing the enterprises where they work. The book chronicles the diversity of new, non-capitalist and non-authoritarian models of business enterprise, offers a compelling theoretical framework for making sense of these ventures, and provides guidance for scholars and activists who are looking to embark on new economic experiments. The book is a timely contribution that will help to motivate, sustain, and inspire new initiatives in economic democracy." - George DeMartino, Professor, Josef Korbel School of International Studies, University of Denver, USA
…mehr
Kundenbewertungen
Schreiben Sie eine Kundenbewertung zu diesem Produkt und gewinnen Sie mit etwas Glück einen 15,- EUR bücher.de–Gutschein!
Bewertung schreiben Bewertung schreiben
Mehr zum Thema