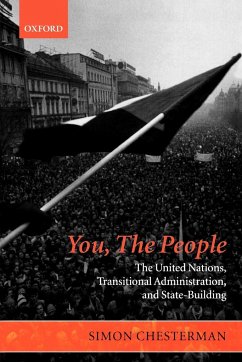 - First overall historical analysis of UN state-building operations
- Timely publication - of direct relevance to conflicts in Iraq and Afghanistan
- Draws on extensive field research and interviews with key individuals
The governance of post-conflict territories embodies a central contradiction: how does one help a population prepare for democratic governance and the rule of law by imposing a form of benevolent autocracy?
Transitional administrations represent the most complex operations attempted by the United Nations. The operations in East Timor and Kosovo are commonly seen…mehr

The governance of post-conflict territories embodies a central contradiction: how does one help a population prepare for democratic governance and the rule of law by imposing a form of benevolent autocracy?
Transitional administrations represent the most complex operations attempted by the United Nations. The operations in East Timor and Kosovo are commonly seen as unique in the history of the UN - perhaps never to be repeated. But they may also be seen as the latest in a series of operations that have involved the United Nations in 'state-building' activities, where it has attempted to develop the institutions of government by assuming some or all of those sovereign powers on a temporary basis. The circumstances that have demanded such interventions certainly will be repeated.

Seen in the context of earlier UN operations, such as those in Namibia, Cambodia, and Eastern Slavonia, the view that these exceptional circumstances may not recur is somewhat disingenuous. Moreover, the need for such policy research has been brought into sharp focus by the weighty but ambiguous role assigned to the UN in Afghanistan and the possibility of a comparable role in Iraq. This book fills that gap. Aimed at policy-makers, diplomats, and a wide academic audience (including international relations, political science, international law, and war studies), the book provides a concise history of UN state-building operations and a treatment of the five key issues confronting such an operation on the ground: peace and security, the role of the UN as government, judicial reconstruction, economic reconstruction, and exit strategies.

Reviews
- In You, the people, Chesterman provides a detailed and incisive analysis of the history, politics and problems of transitional administrations. s
- 'Along with the structure of the book - each chapter begins with an insightful quotation - the combined result is an extremely readable and interesting piece of work, which is of worth to academics, students and practitioners.' -Journal of Conflict and Security Law
- 'Chesterman, director of an international institute at New York University, has made an original study of how new institutions can be created in such war-damaged countries as Bosnia, Cambodia, and East Timor. In his book the weight of the subject and the depth of the research are supported by wit, candor, brevity, and analytical writing of a very high order.' -New York Review of Books
- 'Simon Chesterman has written a pathbreaking book about the varied experiences of the United Nations in state building. Its organization is one of its many strengths.' -Political Science Quarterly
- 'Simon Chesterman, Executive Director of the Institute for International Law and Justice at New York University School of Law, offers a concise, wide-ranging and well-conceived study of diverse international operations, most involving a significant United Nations role The study will help scholars, practitioners, and others to better assess particular constructive and problematic aspects of transitional administration, and perhaps lead to improvements on the ground in the operations of regional organizations, the UN, and occupying states.' -Human Rights Quarterly

Contents
- Introduction
- 1 Colonies and Occupied Territories: Transitional Administrations Through the Twentieth Century
- 2 Power and Change: The Evolution of United Nations Complex Peace Operations
- 3 Peace and Security: The Use of Force to Maintain Law and Order
- 4 Consultation and Accountability: Building Democracy Through Benevolent Autocracy
- 5 Justice and Reconciliation: The Rule of Law in Post-Conflict Territories
- 6 Relief and Reconstruction: The Politics of Humanitarian and Development Assistance
- 7 Elections and Exit Strategies: No Exit Without a Strategy, or No Strategy Without an Exit
- 8 'You, the People': The Future of State-Building