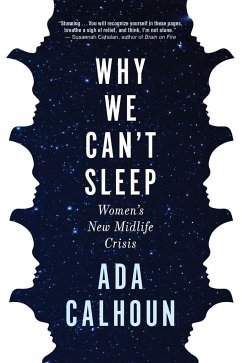 An instant New York Times bestseller-lauded by critics and TV personalities alike-and one of the most anticipated books of the year, Ada Calhoun's Why We Can't Sleep> has ignited an essential conversation about the midlife realities faced by Gen X women, the generation raised to "have it all."

Andere Kunden interessierten sich auch für
Produktbeschreibung
An instant New York Times bestseller-lauded by critics and TV personalities alike-and one of the most anticipated books of the year, Ada Calhoun's <>Why We Can't Sleep> has ignited an essential conversation about the midlife realities faced by Gen X women, the generation raised to "have it all."
Produktdetails
Autorenporträt
ADA CALHOUN is the author of the memoir Wedding Toasts I'll Never Give, named an Amazon Book of the Month and one of the top ten memoirs of 2017 by W magazine; and the history St. Marks Is Dead, one of the best books of 2015, according to Kirkus and the Boston Globe. She has collaborated on several New York Times bestsellers, and written for the New York Times, New York, and The New Republic.
Rezensionen
Praise for Why We Can't Sleep