Walden; or, Life in the Woods (Cactus Classics Large Print) 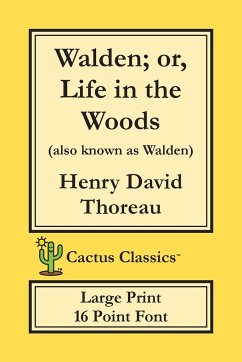 Walden; or, Life in the Woods (Cactus Classics Large Print)

Andere Kunden interessierten sich auch für
Produktbeschreibung
WALDEN; OR, LIFE IN THE WOODS by Henry David Thoreau EDITION: Cactus Classics Large Print - 16 Point Font FONT: 16 point Garamond BOOK TRIM SIZE: 6" x 9" (15.2 cm x 22.9 cm) COVER: Glossy PAPER: Cream TABLE OF CONTENTS: Yes Cactus Classics Large Print (16 point size) editions are typeset with the Garamond font. These editions have a glossy cover, cream paper interior, wide margins, generous white space and good spacing between lines of text. ABOUT THE BOOK AND AUTHOR Walden; or, Life in the Woods was written by transcendentalist Henry David Thoreau (1817-1862) and was first published in 1854. In later editions, the title was shortened to Walden. It is Henry David Thoreau's best known work. In this book, Thoreau describes his experiences and reflections on simple living in natural surroundings. Thoreau stayed in a cabin at Walden Pond near Concord, Massachusetts for two years, two months and two days. The book condenses this period into one year and uses the passage of four seasons to symbolize human development. Thoreau published many works over his life. Two of his best known works are "Walden; or, Life in the Woods" and "On the Duty of Civil Disobedience". Henry David Thoreau was a prolific writer. Some of his works are published under the Cactus Classics imprint of Cactus Publishing Inc. CACTUS CLASSICS LARGE PRINT BOOKS BY HENRY DAVID THOREAU ISBN: 9781773600369 - On the Duty of Civil Disobedience (Cactus Classics Large Print) ISBN: 9781773600376 - Walden; or, Life in the Woods (Cactus Classics Large Print) We regularly add new Large Print Books to our collection.
Produktdetails
Produktdetails
Autorenporträt
Henry David Thoreau (July 12, 1817 - May 6, 1862) was an American essayist, poet, philosopher, abolitionist, naturalist, tax resister, development critic, surveyor, yogi,[3] and historian. A leading transcendentalist,[4] Thoreau is best known for his book Walden, a reflection upon simple living in natural surroundings, and his essay "Civil Disobedience" (originally published as "Resistance to Civil Government"), an argument for disobedience to an unjust state. Thoreau's books, articles, essays, journals, and poetry amount to more than 20 volumes. Among his lasting contributions are his writings on natural history and philosophy, in which he anticipated the methods and findings of ecology and environmental history, two sources of modern-day environmentalism. His literary style interweaves close observation of nature, personal experience, pointed rhetoric, symbolic meanings, and historical lore, while displaying a poetic sensibility, philosophical austerity, and Yankee attention to practical detail.[5] He was also deeply interested in the idea of survival in the face of hostile elements, historical change, and natural decay; at the same time he advocated abandoning waste and illusion in order to discover life's true essential needs. He was a lifelong abolitionist, delivering lectures that attacked the Fugitive Slave Law while praising the writings of Wendell Phillips and defending the abolitionist John Brown. Thoreau's philosophy of civil disobedience later influenced the political thoughts and actions of such notable figures as Leo Tolstoy, Mahatma Gandhi, and Martin Luther King Jr. Thoreau is sometimes referred to as an anarchist.[7][8] Though "Civil Disobedience" seems to call for improving rather than abolishing government-"I ask for, not at once no government, but at once a better government"[9]-the direction of this improvement contrarily points toward anarchism: "'That government is best which governs not at all;' and when men are prepared for it, that will be the kind of government which they will have." Thoreau had a distinctive appearance, with a nose that he called his "most prominent feature".[15] Of his appearance and disposition, Ellery Channing wrote:[16] His face, once seen, could not be forgotten. The features were quite marked: the nose aquiline or very Roman, like one of the portraits of Caesar (more like a beak, as was said); large overhanging brows above the deepest set blue eyes that could be seen, in certain lights, and in others gray,-eyes expressive of all shades of feeling, but never weak or near-sighted; the forehead not unusually broad or high, full of concentrated energy and purpose; the mouth with prominent lips, pursed up with meaning and thought when silent, and giving out when open with the most varied and unusual instructive sayings.
Kundenbewertungen
Schreiben Sie eine Kundenbewertung zu diesem Produkt und gewinnen Sie mit etwas Glück einen 15,- EUR bücher.de–Gutschein!
Bewertung schreiben Bewertung schreiben
Bewertung schreiben Bewertung schreiben